The Online Publishers Assn. on Tuesday released several new in-your-face advertising formats designed to be both more obtrusive and interactive.

Twenty-seven top Internet publishers — including the New York Times, CNN, CBS Interactive, ESPN and the Wall Street Journal — say they’ll try the supersize ads in an attempt to get the attention of Web surfers who have learned to ignore banners. 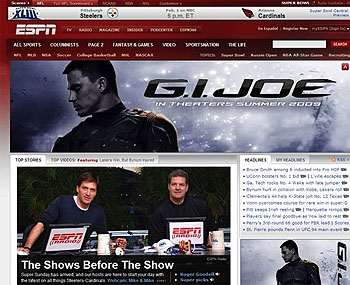 ….The three new types of ads are the “fixed panel,” which looks like part of the page but scrolls up and down as a user does; the “XXL box,” in which users can turn pages within the ad; and the “pushdown,” which opens to display a larger ad.

In its press release, the OPA optimistically suggests that these stupendous new ads will “help stimulate a renaissance of creative advertising on the Internet.”  Maybe so, but I suspect a renaissance of people throwing things at their computer screens is more likely.

But hell, I guess I can’t blame them.  I mean, I work for a magazine that relies on web ads for part of its revenue, but I don’t care.  I still do everything in my power to block the ads I can and ignore the ones I can’t.  I used to unblock ads at motherjones.com, just so I’d know what was going on on my own site, but when our ad server started delivering GE ads that played a soundtrack every time they loaded, I couldn’t take it anymore and finally blocked even that.

So I’m part of the problem.  But here’s the real question this provokes: does general purpose advertising even work?  It’s pretty clear that targeted ads do well: Google ads that are keyed to search queries, for example, or ads in specialty magazines with an audience that’s genuinely eager to see what likeminded merchants have to offer.  But how about non-targeted stuff?

In the web world, we have strong evidence that it works poorly: the clickthrough rate on web banner ads is famously anemic.  So what makes us think that nontargeted TV or newspaper ads work?  There are ways to measure this stuff — the old reader response cards in magazines, post-purchase product surveys (“Where did you hear about Cranberry Pepsi Lite?”), and so forth — but they don’t work all that well.  For the most part, marketeers do their best to target and then just pray that the rest of their advertising budget is doing some good too.

But in the web we finally have a medium where we can actually quantify the impact of nontargeted ads, and it turns out to be pretty low.  Everyone takes this to be a sign that the web is unusually hostile territory for general purpose advertising, but what if that’s the wrong lesson?  Maybe the web is actually typical, and these ads don’t really work very well anywhere else either.  Maybe.