Over at our main site, I’ve got a piece up that I think of as “Nationalization 101.”  (The official title is “Real Capitalists Nationalize,” a phrase I stole from Steve Randy Waldman.) 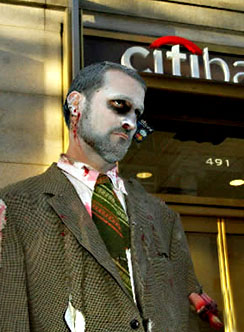 It’s a quick overview of how banks work, why toxic assets have frozen the credit market, and what the options are for dealing with it.  Option #4 is the Swedish solution: selective, temporary nationalization of the weakest banks:

President Obama clearly has considered the Swedish experience: “They took over the banks,” he said on Nightline last month, “nationalized them, got rid of the bad assets, resold the banks, and a couple years later, they were going again. So you’d think looking at it, Sweden looks like a good model.” Yet, he went on, the United States has a “different set of cultures” than Sweden, and Americans would find nationalization a hard pill to swallow.

Unsaid but implicit in Obama’s statement, though, is that Americans could likely be persuaded to accept nationalization if they understand that all the alternatives are worse. In fact, this may have been exactly the point of the bank rescue plan Obama’s treasury secretary, Timothy Geithner, announced shortly after that interview. A key element of the plan involves a mandatory “stress test” for the country’s biggest banks, which sounds remarkably similar to Hempton’s third-party auditor and Sweden’s Bank Support Authority. It could turn out to have been a smart PR move as much as anything: Get everyone talking about the stress tests, worrying about the stress tests, gossiping about the stress tests — and by the time the results become public, it’s hard to imagine any recourse other than nationalization for the banks that don’t pass.

The stress test is also a way to address both of the two big problems with nationalization. Not only can it fairly decide which banks are solvent and which ones aren’t, but it also addresses the dreaded “contagion” problem: Since investors are wiped out when a bank is nationalized, the mere fear of nationalization can scare private investors away from every bank, even the good ones. But if stress tests are done on every bank and the bad ones are all nationalized at once, the good banks are freed from fears that they might be next on the government chopping block.

You’ll notice that in this piece I’m still holding out hope that Geithner’s stress tests are basically designed to give him an excuse for selective nationalization.  I’m still hoping that’s true, I think, but it’s hard to say what’s really going on.  Last night, for example, Ben Bernanke was asked on 60 Minutes if all the big banks the Fed regulates are solvent, and he answered flatly, “I believe they are, yes.”  But then he followed up by mentioning the stress tests and suggesting that if a big bank is insolvent, they’d  “try to wind it down in a safe way.” What’s that supposed to mean?

Add to that the fact that Citigroup and Bank of America, the two banks most often mentioned as basket cases, have recently sworn on stacks of Bibles that their capital position is rock solid.  No more bailouts for them!  And considering that their toxic asset pool was guaranteed by the government a few months ago, which limits their downside losses, they might even be right.  Or, they might be lying through their teeth.  Who knows?

In any case, the full Swedish solution will be a tough sell.  Not only would it involve temporary nationalization of one or two big banks, but it would also feature a systemwide guarantee of all bank obligations.  But that’s basically what we did for AIG, and bailing out all of AIG’s counterparties hasn’t exactly gone down well in the heartland.  Doing the same thing for the rest of the financial system, nationalized or not, would certainly help restore confidence in the banking system, but getting Congress to agree won’t be easy.