McAllen and El Paso are very similar places: similar people, similiar diets, similar health profiles, both border towns only a few hundred miles apart from each other.  But healthcare costs in McAllen are almost twice what they are in El Paso.  What could possibly account for that?  Atul Gawande visited McAllen to find out, and ended up getting multiple answers from a group of doctors he went to dinner with one night.  Finally he got to the bottom of it:

“Come on,” the general surgeon finally said. “We all know these arguments are bullshit. There is overutilization here, pure and simple.” Doctors, he said, were racking up charges with extra tests, services, and procedures.

The surgeon came to McAllen in the mid-nineties, 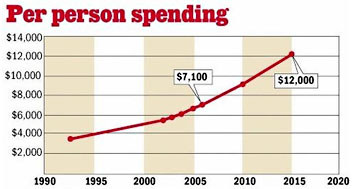 and since then, he said, “the way to practice medicine has changed completely. Before, it was about how to do a good job. Now it is about ‘How much will you benefit?’ ”

….The Medicare payment data provided the most detail. Between 2001 and 2005, critically ill Medicare patients received almost fifty per cent more specialist visits in McAllen than in El Paso, and were two-thirds more likely to see ten or more specialists in a six-month period….They also received two to three times as many pacemakers, implantable defibrillators, cardiac-bypass operations, carotid endarterectomies, and coronary-artery stents. And Medicare paid for five times as many home-nurse visits. The primary cause of McAllen’s extreme costs was, very simply, the across-the-board overuse of medicine.

….“In El Paso, if you took a random doctor and looked at his tax returns eighty-five per cent of his income would come from the usual practice of medicine,” [a hospital administrator] said. But in McAllen, the administrator thought, that percentage would be a lot less.

He knew of doctors who owned strip malls, orange groves, apartment complexes — or imaging centers, surgery centers, or another part of the hospital they directed patients to. They had “entrepreneurial spirit,” he said.

….About fifteen years ago, it seems, something began to change in McAllen. A few leaders of local institutions took profit growth to be a legitimate ethic in the practice of medicine. Not all the doctors accepted this. But they failed to discourage those who did. So here, along the banks of the Rio Grande, in the Square Dance Capital of the World, a medical community came to treat patients the way subprime-mortgage lenders treated home buyers: as profit centers.

This comes via Ezra Klein, who didn’t excerpt anything from the piece because he wanted to encourage everyone to click on the link and read the whole thing.  Obviously I’m not quite so high-minded myself.  Plus there’s the fact that I have a dim view of human nature: most of you guys aren’t going to click the link no matter how much I tell you to, are you?

But you should!  It really is a good piece.  “Overutilization” is a boring buzzword that Gawande breathes real life into.  If you want to know why American medicine should look more like the Mayo Clinic — and why it would be both better and cheaper if it did — turn off the House reruns and read Gawande instead.  And if you want a different perspective on the same issue, try reading Shannon Brownlee’s Overtreated.  It’s good too.

(OK, fine, keep watching House.  It’s a great show.  Just don’t use it as your template for what medical care should look like, OK?)