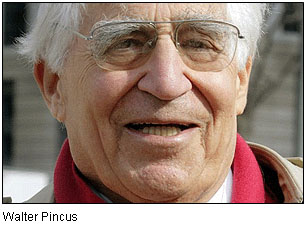 Walter Pincus has an interesting piece about the newspaper biz in the Columbia Journalism Review this month.  The points he makes aren’t exactly new, but they’re worth making anyway.  For example:

We have turned into a public-relations society. Much of the news Americans get each day was created to serve just that purpose — to be the news of the day.

….In 1981, at the beginning of the Reagan administration, Michael Deaver — one of the great public-relations men of our time — began to use early-morning “tech” sessions at the White House, which had been a way to help network producers plan the use of their camera crews each day, to shape the television news story for that evening. Deaver would say that President Reagan will appear in the Rose Garden to talk about his crime-prevention program and discuss it in terms of, say, Chicago and San Francisco. That would allow the networks to shoot B-roll. The president would appear in the Rose Garden as promised, make his statement, perhaps take a question or two, and vanish.

After a while, the network White House correspondents began to attend these sessions, and later print reporters began showing up, too. On days when the president went off to Camp David or his California ranch, Sam Donaldson, the ABC News White House correspondent, began his shouted questions to Reagan, and Reagan’s flip answers became the nightly news — and not just on television. The Washington Post, which prior to that time did not have a standing White House story each day (publishing one only when the president did something newsworthy), began to have similar daily coverage.

At the end of Reagan’s first year, David Broder, the Post’s political reporter, wrote a column about Reagan being among the least-involved presidents he had covered. In response, he got an onslaught of mail from people who said they saw Reagan every night on TV, working different issues. It was a triumph of public relations.

….Today, mainstream print and electronic media want to be neutral, presenting both or all sides as if they were refereeing a game in which only the players — the government and its opponents — can participate. They have increasingly become common carriers, transmitters of other people’s ideas and thoughts, irrespective of import, relevance, and at times even accuracy.