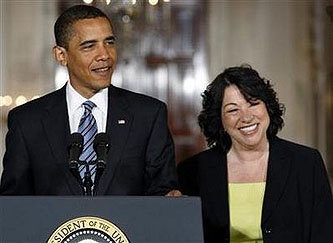 The nomination of Sonia Sotomayor to the Supreme Court raises a question: Who will win the battle for the conservative soul?  In the red corner, we have the insane wingnuts:

Newt Gingrich: “White man racist nominee would be forced to withdraw. Latina woman racist should also withdraw.”  Rush Limbaugh: “How can a party get behind such a candidate? That’s what would be asked if somebody were foolish enough to nominate David Duke or pick somebody even less offensive.” Tom Tancredo: “She’s a member! She’s a member of La Raza!” Matthew J. Franck: “Is she still, and how much of La Raza’s politics does she make her own?” Michael Goldfarb: “Does anyone dispute that Sotomayor has been the recipient of preferential treatment for most of her life?”  Bill Bennett: “Did she get into Princeton on affirmative action, one wonders.” G. Gordon Liddy: “Let’s hope that the key conferences aren’t when she’s menstruating or something, or just before she’s going to menstruate.”

And in the other red corner, we have an improbable band of rebels trying to urge conservatives to act like grownups:

Peggy Noonan: “Newt Gingrich twitters that Judge Sotomayor is a racist. Does anyone believe that? He should rest his dancing thumbs, stop trying to position himself as the choice and voice of the base in 2012, and think.” Jon Cornyn: “This is not the kind of tone that any of us want to set when it comes to performing our constitutional responsibilities of advise and consent.” Julian Sanchez: “What we’re seeing here [] is people clinging to the belief that Sotomayor has to be some mediocrity who struck the ethnic jackpot, that whatever benefit she got from affirmative action must be vastly more significant than her own qualities, that she’s got to be a harpy boiling with hatred for whitey, however overwhelming the evidence against all these propositions is.  This is really profoundly ugly.” Michael Steele: “I know that a lot of folks want to do the knee jerk you know let’s start slammin’ and rammin’, but I think we really need to take a step back from this.” Charles Krauthammer: “What should a principled conservative do?….Nothing ad hominem. The argument should be elevated, respectful and entirely about judicial philosophy.”

Who will win?  I guess we won’t know until Sarah Palin weighs in, will we?