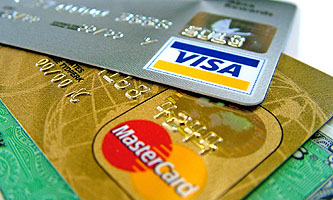 Are credit cards, generally, good things?  Steve Waldman says we have to distinguish between two benefits they provide.  The first is transactional credit, which is simply the convenience of using a card to buy stuff instead of hauling around cash or checks.  This type of credit gets paid off every month.  The second is revolving credit, which is when you deliberately buy more than you can afford with the intention of paying off the charges over time.  It’s essentially a preapproved loan available anytime you have an emergency — or merely an irresistable urge to buy a pair of shoes you don’t happen to have the money for right now.

Steve is right that transactional credit is basically beneficial, while revolving credit isn’t.  In moderation it’s fine, but human nature being what it is, it’s often not used in moderation, which suggests it might be a good idea to limit its availability.  I’m tentatively on board with this so far, but then things go off the rails:

In fact, while transactional credit provision is a perfectly good business, it might be reasonable for the state to offer basic transactional credit as a public good. This would be very simple to do. Every adult would be offered a Treasury Express card, which would have, say, a $1000 limit. Balances would be payable in full monthly. The only penalty for nonpayment would be denial of access of further credit, both by the government and by private creditors. (Private creditors would be expected to inquire whether a person is in arrears on their public card when making credit decisions, but would not be permitted to obtain or retain historical information. Nonpayment of public advances would not constitute default, but the exercise of an explicit forbearance option in exchange for denial of further credit.) Unpaid balances would be forgiven automatically after a period of five years. No interest would ever be charged.

Let’s think about how this would work. For most people, access to various forms credit — transactional credit, auto and home loans, unsecured revolving credit, whatever — is worth more than $200 per year. Although people might occasionally fall behind, for the most part borrowers would pay off their government cards, simply because convenient participation in the economy is worth more than a once-in-five-years $1K windfall. However, people with no savings and irregular income (for whom transactional credit is a misnomer, since they haven’t the capacity to pay) might well take the money and run. The terms of the deal amount to a very small transfer program to the marginal and disorganized, and a ubiquitous form of currency for everyone else. People with higher incomes would want more transactional credit, or revolving credit, which they would acquire from the private sector.

I don’t really get this.  We already have “Treasury Express” cards: this is basically what debit cards are, and they provide the same benefits of transactional credit that regular Visas or Mastercards do.  Why do we need the government for that?

That leaves us with the problem of limiting revolving credit, which is the same problem we have now.  Do we need firmer rules on interest rates, fees, and penalties?  Better bankruptcy protection?  Bans on things like universal default?  An end to tricks and gimmicks and fine-print-laden marketing come-ons?  More sensible ways of setting credit limits?  Maybe.  Probably.  But unless Steve is suggesting that we essentially ban credit cards entirely — and then create some kind of federal mega-authority to limit every other kind of consumer credit too — those are all the same issues we have now.  I’m not really sure what his proposal would accomplish.