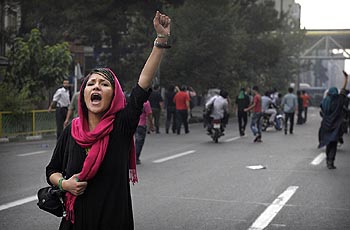 One of Andrew Sullivan’s readers writes:

Ahmadinejad’s and Khamenei’s websites were taken down yesterday — I saw the latter go down within a couple of minutes because of a DDOS attack organised via Twitter. @StopAhmadi is a good source for tweets on this. The other important use of Twitter has been distribution of proxy addresses via Twitter. This would be how most video and pictures of today’s rally have gotten out.

Andrew comments: “I have to say my skepticism about this new medium has now disappeared. Without it, one wonders if all this could have happened.”

It’s true that however things turn out in Iran, this will probably be forever known as the Twitter Revolution.  And yet, I want to dissent a bit.

I followed the events of the weekend via three basic sources.  The first was cable news, and as everyone in the world has pointed out, it sucked.  Most TV news outlets have no foreign bureaus anymore; they didn’t know what was going on; and they were too busy producing their usual weekend inanity to care.  Grade: F.

The second was Twitter, mostly as aggregated by various blogs.  This had the opposite problem: there was just too much of it; it was nearly impossible to know who to trust; and the overwhelming surge of intensely local and intensely personal views made it far too easy to get caught up in events and see things happening that just weren’t there.  It was better than cable news, but not exactly the future of news gathering.  Grade: B-.

The third was the small number of traditional news outlets that do still have foreign bureaus and real expertise.  The New York Times.  The BBC.  Al Jazeera.  A few others.  The twitterers were a part of the story that they reported, but they also added real background, real reporting, and real context to everything.  Grade: B+.  Given the extremely difficult reporting circumstances, maybe more like an A-.

Twitter has been a great tool for the Iranian protesters — and for us.  Marc Ambinder rounds up the evidence here.  But protests have happened before without either Twitter or the internet.  And if we westerners had to rely on only a single news source to tell us what what going on, I’d still choose the dwindling band of serious outlets that provide real reporting from dangerous (and expensive) places.  Cable news may not have covered itself with glory this weekend, but there are still a few precincts of the MSM that did.