Via Felix Salmon, John Gapper complains in the Financial Times today that the Obama administration is backing down on regulatory consolidation: 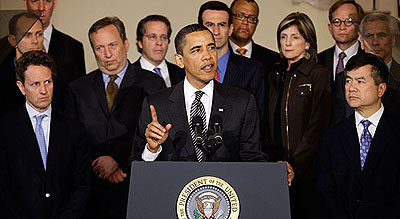 All this is an interesting contrast to the consolidation of regulation by the UK government when it created the Financial Services Authority in 2000 and swept a bunch of self-regulatory organisations and the banking supervision arm of the Bank of England into a single financial regulator.

True, this did not help the UK to regulate large banks any better than the US, given the scale of the financial crisis. On the other hand, fragmentation of regulation caused its own particular difficulties in the US, with financial institutions picking and choosing among regulators.

The US administration has clearly decided that it simply cannot get any large-scale consolidation of regulation through Congress, given the vested interests involved. But that makes its response to the financial crisis seem more like a whimper than a bang.

Britain is not the United States, but there are enough similarities in our financial sectors to make comparisons instructive.  And the bottom line here, as Gapper admits, is that Britain had consolidated regulation, we had fragmented regulation, and it made no difference at all in the outcome.  If anything, in fact, Britain was harder hit than we were.

I’m not opposed to consolidation, but honestly, if you have the same rules and the same kind of people enforcing the rules, and the only thing that changes is the reporting structure — well, that just doesn’t change much.  What’s needed isn’t consolidation per se, but a structure that’s politically more likely to point out credit bubbles when they’re happening and more likely to have the credibility to make people listen to them when they issue their dire warnings.  There’s no special reason why a consolidated regulatory structure would be better at that than what we have now.  In fact, by hiding disagreement within the bowels of a huge bureaucracy, it might even be worse.

(That said, forum shopping among regulators eager to offer lax enforcement in return for increased business does need to be stopped.  But that can be accomplished with a much narrower set of reforms.  You don’t have to consolidate everything into one super-regulator to put a halt to this.)

Gapper’s concluding paragraph, however, is discouraging.  We should all wait to see the final proposals before passing judgment, but it seems pretty likely that he’s right.  Even now, the financial industry pretty much owns Congress, and the likelihood that they’ll allow financial reform to go too far seems slim.  Kinda makes you wonder just what they’d have to do to lose their grip on power.