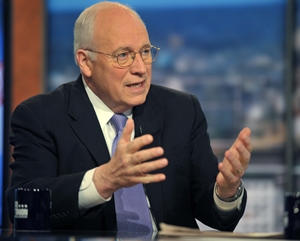 I’ve been unhappy about the Obama administration’s embrace of several Bush-era secrecy rules, but I’m on the fence about the latest one.  David Corn reports that they’re continuing to fight the release of Dick Cheney’s interview with the FBI in the Valerie Plame case:

On Wednesday night, in another move that puts the administration on the side of secrecy over openness, Obama’s Justice Department filed a memo supporting its ongoing opposition to a lawsuit requesting the release of the Cheney interview. This memo included a declaration from Assistant Attorney General Lanny Breuer, who said that if the Cheney interview is made public it could cause public officials in the future to not cooperate with criminal investigations.

I guess what I’m unclear about here is the distinction, if there is one, between an ordinary FBI interview and one with a high-ranking politico.  Just speaking generally, it strikes me that it’s genuinely in the public interest for interviews like these to be kept private unless they lead to criminal prosecutions.  Lots of people really would would be less forthcoming during FBI investigations if they knew their interviews might become public, so it’s reasonable that the default position should be that they stay confidential.  That’s certainly how I’d want things to stand if I were dishing dirt to the FBI.

Now, perhaps things should be different for non-ordinary people like vice presidents.  But I don’t know if that’s part of the legal argument here or not.  Are there any law bloggers out there who can step in and explain what’s going on here?

UPDATE : Jeralyn Merritt points out that FBI interviews are also kept private in order to protect the names and reputations of the innocent, those who don’t get indicted:

Even though this isn’t a grand jury secrecy case, I think in order to protect the privacy and reputation of those who are mentioned or discussed by the subject of a law enforcement interview, the reports of these interviews, untested by cross-examination, should remain in government hands and not subject to release via a FOIA request.

….The same rule should apply to Cheney as to everyone else. In my view, the Congressional Committee had a right to the documents since they are federal officials investigating a matter related to the subject matter of the grand jury’s Valerie Plame leak investigation. But CREW and the public don’t. It’s too bad that Dick Cheney is the one who wins if the material is not released to CREW and the public, but I’d rather have that than a precedent that allows reports of law enforcement interviews of the average citizen who ultimately is not indicted, and who may have slandered Tom, Dick and Mary during their interview, subject to public disclosure.