Earlier today I was thinking of responding in more detail to yesterday’s Jim Manzi post about George Will’s brand of climate change denialism, but before I could get around to it he put up yet another post on the same subject.  You can read them here and here, but I think I can summarize them briefly without doing too much damage to his argument:

More specifically, what we really want to know isn’t merely the trend, but how well the trend observed today matches the predictions made by the scientific community in the past.  That’s the only way of knowing whether their models are any good.  George Will may have expressed himself on this point too simplistically, but that’s basically the question he’s asking. 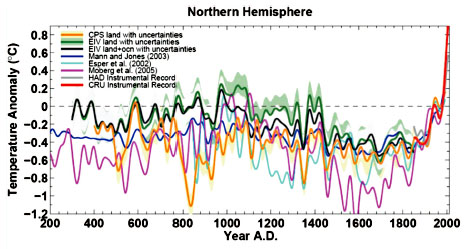 I guess there are a lot of things I could say about this, but I’ll try to keep things brief.

First: Both Will in his column, as well as Manzi in his initial post, suggested that global temps haven’t risen for the past ten years.  But that’s wrong.  It’s true that the warming signal has been pretty flat for the past five or six years, something that skeptics have latched onto gleefully even though it’s almost certainly meaningless, but for virtually any recent ten-year span you choose, global temps are up by about 0.2ºC.  This isn’t a nitpicky quibble.  Even if you’re primarily trying to make a broader point (or, in Will’s case, a cutesy point), you’re still obligated to represent the data correctly.

Second: It’s true that climate models have changed dramatically over the past 20 years as new data has poured in and more people have entered the field.  That makes it hard to judge the success of these models empirically.  The old ones are known to be flawed and the more recent ones haven’t been around long enough to be measured.  So perhaps some caution is called for.

As an academic point, that’s OK — though in fact, even the very earliest climate model from 1988 seems to have performed pretty well over the past two decades.  But here’s the thing: George Will has an enormous readership and he isn’t interested in making subtle academic points about epistemology and the nature of scientific uncertainty.  Will, along with most of the conservative establishment, simply wants to fool his audience into believing that the earth is not, in fact, warming.  He has made this absolutely crystal clear on multiple occasions. So when Manzi says this:

The instincts of those who are grasping for some way to hold the tools used to make temperature predictions accountable to reality in some way are sound, even if their method is somewhat misguided. They aren’t idiots or morons, they’re just not specialists.

That’s just not supportable.  If Will were genuinely trying to grapple with a difficult subject, he wouldn’t cherry pick data in a way that even a high school sophomore could tell him was fraudulent.  Will may not be an idiot or a moron, but as I said in my original post, he is a deliberate charlatan.  Nobody who’s serious about the climate change debate should be trying to soft pedal this.

All that said, I agree entirely with Manzi about this:

What’s especially ironic abut a lot of the commentary on the post is that lots of people take assertions of uncertainty in climate forecasts as undercutting the case for emissions mitigation, so those on the Right argue for uncertainty, and those on the Left argue the opposite. In the sophisticated AGW debate, the economic justification for mitigation is seen as, conceptually, an insurance premium. If the expected warming takes place with expected effects, it is very difficult to justify the economic costs of mitigation, and therefore it is a hedge against much-worse-than-expected effects. Therefore, the greater the uncertainty in climate prediction, the stronger the case for mitigation — uncertainty is not our friend. So before you accuse me of intellectual dishonesty, recognize that in pointing out limitations in the current practice of climate model validation, I am actually arguing a point that cuts against my stated policy preference.

As I’ve mentioned previously, if we could be sure that global temperatures would rise no more than 2ºC over the next century, then you could make a case that it’s not worth trying to prevent it.  Not a great case, perhaps, but maybe a defensible one.

But the real reason to get serious about global warming is that we can’t be sure of that.  In particular, as more data has come in and our models have gotten better, it’s looking more and more as if the likelihood of warming in the range of 4-5ºC or even higher is very real.  That would be undeniably catastrophic, and if there’s even a 10% chance of that happening, we need to blow our gaskets trying to stop it.

Unfortunately, here in the real world, that’s not why the skeptics are continually blustering about the uncertainty in climate models.  They’re doing it because they want people to believe that global warming is a hoax and temperatures over the next century won’t rise at all.  No good can come of being useful idiots for this crowd.