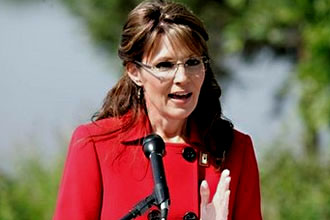 The New York Times takes a look at Sarah Palin’s post-campaign life up in Alaska:

Almost as soon as she returned home, the once-popular governor was isolated from an increasingly critical Legislature. Lawmakers who had supported her signature effort to develop a natural gas pipeline turned into uncooperative critics.

…. Her growing list of detractors quickly signaled that they were not impressed with her celebrity status. “We had business to do,” said State Representative Nancy Dahlstrom, a Republican who had worked on Ms. Palin’s 2006 race for governor. “It’s not all about adoration.”

….Democrats who had been crucial to her governing coalition now saw her as a foe. Republican leaders who had previously lost fights with her smelled weakness. An abortion bill she supported requiring parental consent stalled, the Legislature rejected her choice for attorney general and lawmakers became skeptical of the natural gas pipeline effort.

There was a lot more than just this, of course.  Among other things, there were money issues, personal issues, organizational issues, and an almost pathological inability to avoid a feud no matter how small or trivial.  But the fact that she found it almost impossible to govern Alaska after she returned obviously played a big role in Palin’s decision to quit too.

Which got me to thinking: when was the last time someone ran for national office, lost, and then had to go back to being governor?  Answer: in the past 50 years it’s happened only once, to Michael Dukakis after he lost in 1988.  And as you may recall, things didn’t go swimmingly for Dukakis either when he returned to the statehouse — despite the fact that he was an experienced governor, didn’t have any money problems, didn’t participate in endless personal feuding, didn’t try to position himself for another run four years later, didn’t have tabloid magazines staked out in front of his house 24/7, was famously well organized, and had no problem discussing issues intelligently when called upon to do so.

In other words, maybe returning to run a state after participating in a brutal presidential campaign is just a tough assignment for anyone in today’s media-saturated environment.  But Sarah Palin never figured that out, and if the Times is to be believed she refused to listen to anyone who tried to tell her.  As always, Sarah Palin’s worst enemy was — Sarah Palin.

UPDATE: More here from the LA Times: “What is remarkable is the contempt Palin has engendered within her own party and the fact that so many of her GOP detractors are willing, even eager, to express it publicly.”