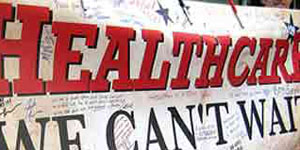 Joe Klein on the public option:

I never had much interest in a public option. I think the perils of government-delivered (as opposed to funded) services are obvious and immense….On the other hand,  I am very much in favor of a single-payer system in which the government gives everyone a tax credit, scaled according to income, that enables people to select from an array of government approved and regulated health insurance choices.

There’s something very odd going on with the debate over the public option.  Granted, it means different things to different people, but I’m pretty sure that nobody in a position of legislative authority has ever proposed a public option that provides “government delivered” healthcare.  There are various versions of the public option, but all of them are alternatives to the private insurance industry, not the private

medical industry.  In some form or another, a public option would be a federally run insurance program, similar to Medicare, that pays for medical services you get from the private sector.

In effect, a public option is a backstop.  The basic point of the healthcare plans currently on the table is to reform the insurance industry (community rating, no recission, no rules about preexisting conditions, out-of-pocket caps, etc.) and then to provide subsidies to low-income households so they can afford to buy this reformed insurance.  But all those new regulations have to be enforced, and a public option would be a way of keeping insurers honest via competition even if the rules turn out to be imperfect.  Ideally, though, the regs would work and very few people would have an incentive to sign up for the public plan in the first place.

Personally, I still think that backstop is pretty important.  New rules never work perfectly, regulatory capture is always right around the corner, and a public option would provide competitive pressure that would keep costs lower.  On the other hand, there’s also a downside: a public option provides a kind of safety valve for private insurers.  Maybe they can no longer flatly turn down someone with an expensive preexisting condition, but they can probably slow roll an application pretty effectively — and the victim of the slow rolling is a lot less likely to complain about it if he has the option of just throwing in the towel and signing up for the government plan instead.

So as much as I’d like to have a public option (primarily for its ability to force more robust price competition), I just don’t see it as something to threaten nuclear destruction over.  If insurance reforms are robust and low-income subsidies are decent, that’s a huge win for millions of people, and it’s a win we can build on.  And contra Atrios, social legislation does have a history of getting better after it’s first passed.  Just ask Henry Waxman.

There’s more to say about this.  For example: most European countries rely on regulated private insurers of one kind or another to provide universal coverage, and they’ve managed to make this work.  And: a credible threat only works if the opposition is afraid you might carry it out.  But as near as I can tell, the folks who oppose the public option aren’t really all that afraid of the possibility that healthcare reform sinks completely.  Plus: the only way to get it is via reconciliation, and various comments to this post make it pretty clear that trying to pass a huge healthcare bill via reconciliation is probably impossible.

It’s worth fighting for a public option.  But it’s not worth sinking healthcare reform over it.  That would hurt too many real flesh-and-blood people who need this, and a second chance wouldn’t come along for a long time.  We’ve failed on the healthcare front too many times to accept failure again.