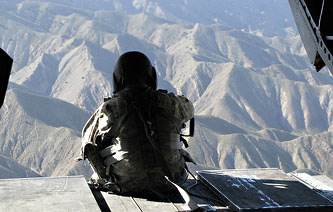 In a region the Taliban have lorded over for six years, and where they remain a menacing presence, American officers say their troops alone are not enough to reassure Afghans. Something is missing that has left even the recently appointed district governor feeling dismayed. “I don’t get any support from the government,” said the governor, Massoud Ahmad Rassouli Balouch.

….Even with the new operation in Helmand Province, which involves the Marines here and more than 3,000 others as part of President Obama’s troop deployments, the military lacks the troop strength even to try to secure some significant population centers and guerrilla strongholds in central and southern Helmand.

American military commanders with the NATO mission in Afghanistan told President Obama’s chief envoy to the region this weekend that they did not have enough troops to do their job, pushed past their limit by Taliban rebels who operate across borders.

….The possibility that more troops will be needed in Afghanistan presents the Obama administration with another problem in dealing with a nearly eight-year war that has lost popularity at home, compounded by new questions over the credibility of the Afghan government, which has just held an as-yet inconclusive presidential election beset by complaints of fraud.

OK then.  More troops aren’t getting the job done because we’re not getting any support from the Afghan government.  So we’re going to ask for more troops.

OK, OK: I know that’s just a smart ass comment.  In fact, here’s some good news from McClatchy: “Pakistan’s extremist Taliban movement is badly divided over who should be its new leader, and analysts and local tribesmen say the al Qaida-linked group may be in danger of crumbling.”  Though even that’s a mixed blessing.  The second NYT story suggests that the death of Baitullah Mehsud, which set off the problems in the Pakistani Taliban, may also cause the Pakistani army to lose interest in the tribal areas and move on to other, shinier toys.

Overall, the evidence suggests that steadily increasing U.S. troop strength has had virtually no effect in the past; that the Taliban is getting continually stronger; that the central government is corrupt and incompetent; and that even under the best circumstances the Afghan army can’t be brought up to speed in less than five years.  At the same time, U.S. commanders say they understand that they have only 12-18 months to turn things around.

Someone needs to explain to me how that’s going to happen.  Anything even remotely plausible will do for a start.  Because I sure don’t see it.