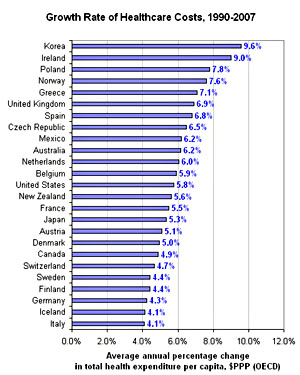 Michael Mandel at Business Week looks at how fast healthcare costs are rising around the world and says:

It’s interesting to see that the UK, with its “socialized medicine,” actually had faster health spending growth than the U.S., at least according to these figures. On the other hand, other countries with single-payer systems, such as Canada, had slower growth.

Probably the safest thing to say is that healthcare costs are rising at a pretty good clip everywhere in the world, no matter how different countries organize things.  The main drivers of rising costs, after all, are global in nature.

Beyond that, though, you need to be aware of specific local issues too.  When Tony Blair came to office in 1997, for example, one of his campaign promises was specifically to increase funding for the NHS.  Britain was spending too little on healthcare, and he wanted spending to rise quickly.  So it’s no surprise that spending went up.

Likewise, South Korea, which is #1 on the chart, spent the 80s and 90s implementing a national healthcare plan.  Their spending rose considerably, but again, that was because they deliberately chose to extend coverage universally.  They wanted to spend more money.

On the other hand, the timeframe in Mandel’s chart excludes the late 80s, when U.S. healthcare spending exploded, and includes the years 1994-2000, when the great HMO revolution in the United States suppressed healthcare costs somewhat.  So our numbers probably look a little lower than they really are.  But the HMO revolution turned out to be a one-shot deal: costs shot back up in the early 2000s and have since come back down only a bit.

None of this is meant to really argue a lot with Mandel.  Roughly speaking, as his chart shows, the biggest increases have been in countries that currently spend the least on healthcare (Poland, Greece, Mexico, etc.) or in countries that were deliberately trying to spend more (South Korea, UK).  Contrariwise, with the exception of Norway, most of the big-spending countries are in the bottom half of the graph.  The United States is an obvious outlier, with enormous spending and a high growth rate, but everyone is having trouble controlling costs.  We’re not the only ones who want all the latest treatments, after all.

UPDATE: It’s also worth keeping in mind the power of compound growth.  Even a seemingly minuscule difference adds up over the years.  France’s growth rate is only 0.3% less than ours, but $100 of healthcare in 1990 would now cost $276 in the United States and $262 in France.  That’s nearly a 10% difference.  Germany is even more impressive: $100 of healthcare in 1990 would cost only $213 in Germany today.  That’s a whopping 23% less than we’re paying.  And of course, their costs were a lot lower to begin with.