If you want to get a taste of the almost total conservative dysfunction over healthcare reform, the LA Times is your one-stop shop this morning.  They asked four well-known conservatives to go beyond just complaining about Obamacare and instead “propose ways to make the American healthcare system better.”  Game on!  Let’s see what they have to offer: 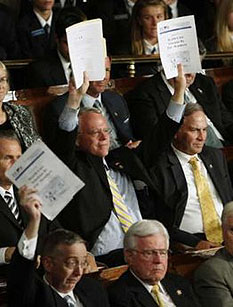 places to exercise and sources of healthy foods.”) And if you get sick anyway?  Frist doesn’t bother saying anything about that.

Mickey Edwards says the government should (a) “authorize” a private insurance pool that the uninsured and self-insured could join and (b) ban insurance companies from turning down applicants with preexisting conditions.  But (a) could exist today if anyone wanted to create such a pool and (b) would destroy the health insurance industry unless it’s paired with an individual mandate.  Edwards seems unaware of either of these things.

David Frum says we should allow insurers to sell their policies nationwide.  End of proposal.  This is like being asked how GM can revitalize itself and suggesting they should put better tires on their cars.

And finally, there’s Richard Viguerie, who even most conservatives shun as a crank.  Basically, he thinks we should make people pay for their own coverage (i.e., give them more “skin in the game”), we should encourage higher industry profits, and we should by God not create a government database of medical records.  Or something.  To be honest, I’m not sure.

This is pathetic.  Nationwide insurance companies might be a good idea.  Wellness programs are certainly a good idea.  (Though not an especially conservative one.)  And community rating is a good idea too.  But they do virtually nothing to extend healthcare to the uninsured, nothing significant to drive down costs, and nothing to reform the insurance industry unless they’re embedded in a broader plan.  They’re flea specks on a problem the size of an elephant.

Granted, these guys were writing op-eds, not white papers, but none of them made so much as a passing mention of anything more than these few disconnected talking points.  Our country’s 47 million uninsured weren’t even on their radar screen. The problem isn’t that the Times didn’t give them enough space, the problem is they flatly don’t have any idea how to make American healthcare more broadly accessible or how to arrest its steady and relentless deterioration.  No wonder conservatives have decided to just say No instead.  When you’ve got nothing serious to offer, what choice do you have?