Do baseball players make a greater number of spectacular plays than they did 30 years ago?  Of course not.  It just seems like it because ESPN packages them all up for us every evening on SportsCenter. 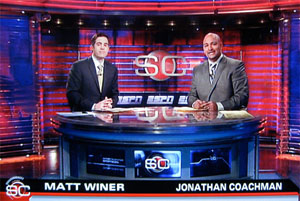 These days, we get to see every spectacular play, not just the ones in the games we happen to watch.

David Post calls this the ESPN Effect and wonders if it applies to politics:

All I hear from my left-leaning friends these days is how crazy people on the right are becoming, and all all I hear from my right-leaning friends is how crazy people on the left are becoming, and everyone, on both sides, seems very eager to provide evidence of the utter lunacy of those on the other side.  “Look how crazy they’re becoming over there, on the other side!” is becoming something of a dominant trope, on left and right.  It is true that we’re seeing more crazy people doing crazy things on the other side (whichever side that may be, for you) coming across our eyeballs these days.   But that’s all filtered reality; it bears no more relationship to reality than the Sportscenter highlights bear to the game of baseball.

My very, very strong suspicion is that there has never been a time when there weren’t truly crazy people on all sides of the political spectrum doing their truly crazy things. Maybe 1% or so, or even 0.1% — which is a very large number, when you’re talking about a population of, say, 100 million.  They didn’t get through the filters much in the Old Days, but they do now.  All this talk about how extreme “the debate” is becoming — how, exactly, does anyone get a bead on what “the debate” really is?  In reality?

Is he right?  Are Fox News and Twitter and the blogosphere and talk radio the collective SportsCenter of politics?  Or are people really crazier than they used to be?

Or is it even worse than that?  SportsCenter mostly just records what happens.  (It might also play an active role in producing more spectacular plays because players are eager to make the night’s highlight reel, but that’s a small effect.)  But in politics it’s worse.  Not only might people act crazier in order to get on the news, but seeing all those crazy people might drive the rest of us crazier too.  So maybe at first this was just the ESPN Effect, but over time it became a vicious circle and now there really are more crazy people around.  I sure feel crazier these days.  How about you?