Via the mysterious Will, io9 has a guest post this week from Chanda Phelan, a graduate of Pomona College who recently completed a thesis on post-apocalyptic literature.  Basically, she looked at 423 books, poems, and short stories about the apocalypse (full list here) in order to try and divine trends on just what the fictional causes of fictional apocalypses are.  Fun!

Anyway, the result is a gigantic chart, partly excerpted below.  And some discussion:

I wanted to see if there were patterns in how writers saw the monster. As it turned out, the patterns were clearer than I imagined. Nuclear holocaust was really popular after 1945; that’s to be expected. But the precipitous and permanent drop in nuclear war’s popularity after the dissolution of the U.S.S.R. in 1991 (see chart)? That surprised me.

….The easily spotted trends make the patterns’ total collapse in the mid-1990s even weirder. Human-created apocalypses shrink dramatically, and there’s a sudden spike of unexplained apocalypse scenarios at the turn of the century. What happened? One possibility is that every End started to feel clichéd. The terror of a possible nuclear war faded, and no new extravagant ways to kill ourselves appeared to replace it.

My theory: most the explained apocalypses hightailed it to the movie theater, where practically the whole point of apocalyptic storytelling is to show you exactly how the planet is destroyed in loving IMAX/Technicolor/Dolby CGI detail.  This wouldn’t really be on my mind except that I’ve now seen the trailer for 2012 about a hundred times — it feels like a hundred times, anyway — and apparently the purpose of the movie is to make the entire genre obsolete by rolling up every disaster movie trope ever invented into one ultimate 2-hour extravaganza never to be surpassed.  Everything will be destroyed.  Every manner of destroying things will be used.  Every cliche will be exploited.  When you’re done, you will never need to see another disaster movie ever again!

Which is fine with me.  I’m just wondering if they’ll even pretend to tell a story while all this mayhem is going on.  Or is that too old school these days?

POSTSCRIPT: I also have a question about the chart: what happened in 2000?  Not a single work of planet-ending fiction in the entire year?  Really? 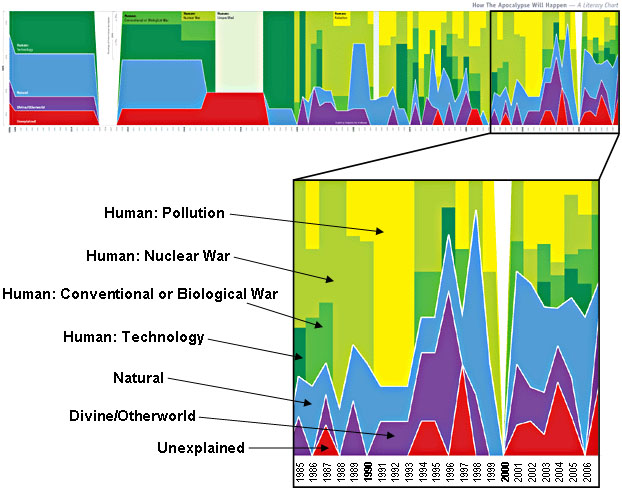