Happy Mutual Birthday to Kevin Drum, elder statesman of the October-19th cohort of bloggers. To make this one special, I’ll attack him from the left. It isn’t possible to get the banksters “off the federal teat immediately” or otherwise. There is simply no guarantee we make today that can bind the politicians of tomorrow. That’s not even necessarily a nebulous “tomorrow” either.

Nor can we guarantee that, when the time comes, it would even make sense for tomorrow’s politicians to honor today’s future refusal. We have to figure out how to organize a political economy predicated on massive if implicit subsidies to the finance industry and its owners and executives so as to minimize the harm they can do and so it works tolerably for the rest of us. Am I optimistic that we can do this? Not so much. But since we can’t cut ‘em off, all we can hope to do is keep ‘em in line.

Bollocks.  If Goldman Sachs is in good enough shape to pay back their TARP funds and earn billions in highly leveraged trading profits, they’re in 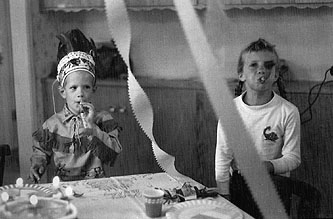 good enough shape to give up their financial holding company status, their FDIC guarantees, and the $12 billion in taxpayer dough that got funneled their way via AIG.  This seems like a subject that can unite everyone from Rush Limbaugh to Michael Moore.

But I agree with all the other stuff.  And it is our mutual birthday, #51 for me.  To celebrate, here’s a photo of #5.  That’s my sister on the right.  I don’t remember the whole Indian costume thing, but pictures don’t lie, do they?  Not in 1963, anyway.  I’d like to see Jim post something similar to prove he’s not actually a killer robot from the Andromeda galaxy who’s merely posing as a mild-mannered blogger until the time is ripe to enslave us all.  Because that’s a real possibility, you know.  I think I heard it on the Glenn Beck show.

UPDATE: And for a birthday present, I’d like someone to explain why it is that every year the BCS computers hate USC so much.  I mean, we play pretty good nonconference teams and haven’t lost to one in the last eight years.  (Yeah, yeah, except for that one.)  What’s the deal with silicon hatred of the Trojans?