Anyone who’s been paying attention for the past year shouldn’t be surprised by this, but it’s something that’s always worth re-emphasizing: the federal bailout of the banking industry last year has allowed banks to rebound 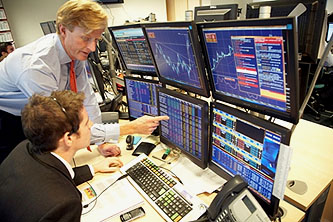 and make enormous amounts of money this year.  Without the bailout, many of them wouldn’t even be around today, and they certainly wouldn’t be making vast sums of money:

Many of the steps that policy makers took last year to stabilize the financial system — reducing interest rates to near zero, bolstering big banks with taxpayer money, guaranteeing billions of dollars of financial institutions’ debts — helped set the stage for this new era of Wall Street wealth.

….With interest rates so low, banks can borrow money cheaply and put those funds to work in lucrative ways, whether using the money to make loans to companies at higher rates, or to speculate in the markets. Fixed-income trading — an area that includes bonds and currencies — has been particularly profitable.

….Goldman Sachs and its perennial rival Morgan Stanley were allowed to transform themselves into old-fashioned bank holding companies. That switch gave them access to cheap funding from the Federal Reserve, which had been unavailable to them.

Those two banks and others like JPMorgan were also allowed to issue tens of billions of dollars of bonds that are guaranteed by the Federal Deposit Insurance Corporation, which insures bank deposits. With the F.D.I.C. standing behind them, the banks could borrow the money on highly advantageous terms. While some have since issued bonds on their own, they nonetheless enjoy the benefits of their cheap financing.

As the piece points out, banks aren’t using all this cheap money to increase lending.  They’re using it to fund bigger and bigger bets in the fixed-income sector — the same sector that brought us junk bonds, credit default swaps, subprime loan securitization, interest rate carries, collateralized debt obligations, and all the rest of Warren Buffett’s “financial weapons of mass destruction.”  Fixed income was a sleepy backwater until about 30 years ago, and if we had any brains we’d apply a massive dose of regulatory narcotics to make it that way again.  Instead, we’re actually egging it on.  It’s like giving Nero a new barbecue lighter for Christmas because his last one got burned up in that big fire.

Anyway, in the absence of any will to seriously regulate these guys, at the very least we should demand that they get themselves off the federal teat immediately.  They’re all fond of the fiction that they’re rugged individualists now that they’ve paid back their TARP money, but it ain’t so.  Taxpayers saved them last year, and taxpayers are underwriting their profits this year.  I can think of better things for taxpayers to be doing.