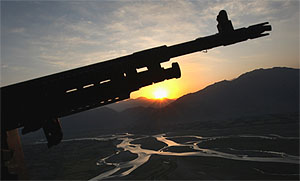 Matt Yglesias pushes back today on my contention that a counterinsurgency effort in Afghanistan is probably doomed unless the national government is largely accepted as legitimate by the Afghan public.  He’s not in favor of a big COIN effort, but:

At the same time, I think [] critics have developed a tendency to drastically understate the extent to which COIN could “work” in Afghanistan.

….I went and looked up the most corrupt countries on earth at Transparency International and […] Afghanistan, as you can see, is pretty corrupt. That said, it’s not really far out of line with local norms. Sundry other central Asian states join it at the bottom of the barrel. And while it’s true that some of the most corrupt countries are anarchic failed states, the examples of Myanmar and Turkmenistan clearly indicate that establishing effective control over your territory doesn’t at all require you to develop good governance or be respected by the people.

Well, sure, but I don’t think anyone is arguing that corrupt states can’t be effective.  The difference, though, is that a foreign superpower isn’t fighting a war in any of those other places.  That’s the issue: not whether corrupt states can “work,” but whether a foreign army can successfully fight an insurgency when it’s allied with a government that has little local support.  In fact, the success of the surge in Iraq, which Matt mentions, is precisely due to the fact that, corrupt or not, Nouri al-Maliki’s government had built up a shaky but workable coalition among Shiites, Kurds, and Sunnis.  It wasn’t exactly a shining beacon of good governance, but a combination of bribery, al-Qaeda overreach, sectarian cleansing, and a ceasefire from the biggest opposition group opened up just enough space for a counterinsurgency operation to work.  Without at least that minimal level of support for the Maliki government, the surge almost certainly would have failed.

In the modern era, as far as I know, the track record of success for counterinsurgencies led by foreign powers fighting alongside unpopular local governments is approximately zero.  In fact, I’m pretty sure it’s exactly zero.  So the question isn’t whether Karzai is corrupt — of course he is — the question is how wide his support is.  That’s actually a bit of a tricky question, especially in the fractious tribal politics of Afghanistan, but it’s the question to ask.  Corruption is just a symptom, not the core problem.