Conservative apostate Bruce Bartlett explains why he became an apostate:

During the George W. Bush years [supply side economics] became distorted into something that is, frankly, nuts — the ideas that there is no economic problem that cannot be cured with more and bigger tax cuts, that all tax cuts are equally beneficial, and that all tax cuts raise revenue….As a consequence, we now have a tax code riddled with tax credits and other tax schemes of 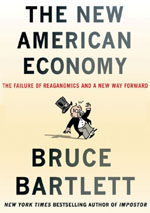 dubious merit, expiring provisions that never expire, and an income tax that fully exempts almost on half of tax filers from paying even a penny to support the general operations of the federal government.

Indeed, by destroying the balanced budget constraint, starve-the-beast theory actually opened the flood gates of spending. As I explained in a recent column, a key reason why deficits restrained spending in the past is because they led to politically unpopular tax increases. But if, as Republicans now maintain, taxes must never be increased at any time for any reason then there is never any political cost to raising spending and cutting taxes at the same time, as the Bush 43 administration and a Republican Congress did year after year.

The supply-siders are to a large extent responsible for this mess, myself included. We opened Pandora’s Box when we got the Republican Party to abandon the balanced budget as its signature economic policy and adopt tax cuts as its raison d’être. In particular, the idea that tax cuts will “starve the beast” and automatically shrink the size of government is extremely pernicious.

In most countries, there’s sort of a natural cycle to politics.  For a while, voters elect liberals who promise lots of goodies but also raise taxes.  People like the goodies, but eventually get tired of the taxes, and throw the bums out.  Conservatives then take office promising to cut taxes and restrain spending growth.  People like the low taxes, but eventually they get itchy for more goodies so they throw the bums out.  Rinse and repeat.

Whether deliberately or not, Reagan and the supply siders killed this cycle.  They decided they could stay in office forever by cutting taxes and increasing spending, thus pleasing everyone.  It even worked for a while.  In the ensuing 28 years Republicans held the presidency most of the time and controlled Congress for much of the rest.

But eventually the piper has to be paid.  We still haven’t quite come to grips with that, but we can’t avoid it too much longer.  Either we (a) slash government spending in ways that the public quite plainly isn’t willing to do, (b) raise taxes in ways that the public isn’t yet willing to do, or (c) allow the rest of the world to do it for us.  I used to be more optimistic about the possibility of avoiding (c), but lately I’ve begun to wonder.  I’ve read more than a few pronouncements over the past couple of years about the death of the tax revolt — I think I’ve even written a few myself — but I have to admit that it’s not really looking all that dead these days.  Not here in California, anyway.

On the other hand, Italy hasn’t collapsed yet, and we’re still several years away from being as bad off as they are, so we’ve got time.  Maybe we’ll come to our senses sometime in Obama’s second term.  Maybe.