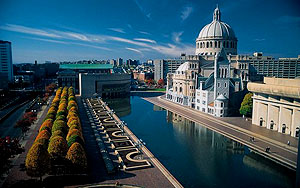 From the Los Angeles Times, here’s the latest on the healthcare front:

Backed by some of the most powerful members of the Senate, a little-noticed provision in the healthcare overhaul bill would require insurers to consider covering Christian Science prayer treatments as medical expenses.

The provision was inserted by Sen. Orrin G. Hatch (R- Utah) with the support of Democratic Sens. John F. Kerry and the late Edward M. Kennedy — both of Massachusetts, home to the headquarters of the Church of Christ, Scientist….The spiritual healing provision was introduced in the House by Rep. John Shimkus (R-Ill.), whose district includes a Christian Science school, Principia College.

I have a conflict of interest here since I come from a Christian Science background, but holy cow does this seem like a bad idea. Just a really, stupendously bad idea.  It’s true that not everything that seems like a slippery slope really is one, but this really is one.  If it passes, can you imagine how this would play out among the Colorado Springs set within a few years?  The mind reels.