In a working paper she just finished this fall, “The Real Value of Fakes,” Gosline interviewed hundreds of consumers who knowingly bought fake luxury apparel, many at “purse parties” 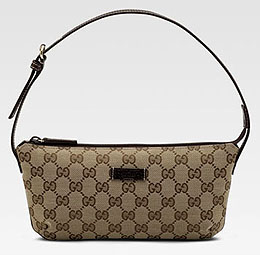 where such goods are sold. Gosline found that within two years, 46 percent of these buyers subsequently purchased the authentic version of the same product — even though other people could not necessarily tell the difference.

Felix calls this finding “astonishing,” but it actually seems like it makes a kind of sense to me.  Think about the kind of person who buys a fake Gucci bag.  It’s probably somebody who really likes the idea of owning a Gucci bag and would buy one if she had the money.  But she doesn’t, so she buys a fake at a purse party.  And she likes it!  She especially likes the fact that other people think she owns an expensive bag.  Still, it gnaws at her.  When people ask if it’s Gucci, she has to lie, and she doesn’t really like that.  What’s more, the longer she owns the fake, the more she understands the subtle differences that identify the real thing.  Eventually she realizes it’s possible that really sophisticated people — i.e., the very people she most wants to impress — can tell it’s a fake immediately and are laughing at her behind her back.  That makes her nervous.  But she’s really gotten attached to Gucci during the time she’s carried around the fake.  So she starts saving her money.  Or maybe she gets a raise.  Or something.  And then she goes off and buys a real Gucci, one that not only looks good, but that she can take out in public without feeling nervous that someone will find her out.

That’s not everyone, of course.1  There are also people who just flatly can’t afford a real Gucci and never will.  But in those cases Gucci isn’t losing anything when they buy a fake.  And the genuinely well off who can afford a Gucci bag probably wouldn’t be caught dead with a fake no matter how many secretaries and junior account managers seem to be walking down the streets with one.

Obviously this all depends on just how big the counterfeit market is and whether fakes really are largely “starter” pieces that help to keep people brand loyal until they can afford the real thing.  If the market is huge, then it might be taking business away regardless.  If it’s small, it probably isn’t.  And the answer to that is that the market for counterfeit goods is almost certainly way smaller than the numbers that are routinely tossed around with almost no basis in fact ($200 billion and 750,000 jobs are the usual suspects).  Felix has more here, and Julian Sanchez wrote the definitive debunking here.

1And it’s worth noting that this dynamic only applies to luxury goods, not to things like car parts or razor blades.