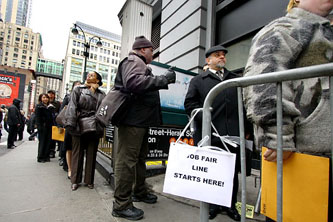 Nearly a year after Obama’s inauguration, judging by where the Democrats stand today, it’s clear that they have made a colossal miscalculation. The latest unemployment and housing numbers underscore the folly of their decision to pay so much attention to health care and climate change instead of focusing on the economy “like a laser beam,” as President Clinton pledged to do during his 1992 campaign. Although no one can fairly accuse Obama and his party’s leaders of ignoring the economy, they certainly haven’t focused on it like a laser beam.

….Much of the political debate, meanwhile, has been obsessed with details of competing health care reform bills. Some analysts have wondered whether Democrats in Congress would be better off passing an unpopular bill or risking the consequences of failing to pass one at all. More to the point, though, is the probability that if Obama and Hill Democrats had taken a more modest approach to health care reform, they could have pivoted back to jobs and the economy sooner. It doesn’t take much imagination to envision Obama declaring, “Health care reform is a journey; not a single step. We are today laying a foundation on which America can build better health care.”

I don’t really understand this. Is it a purely political argument that, regardless of the merits, Obama should have been viewed as spending 24/7 hunkered down in the West Wing helping create jobs for American workers? Or is it a substantive argument that governments have limited bandwidth and Obama should have spent more of his on reducing the unemployment rate?

The former is puerile and the latter is mysterious. What exactly should he have done? He passed a big stimulus bill, and it’s plain that there’s no political will in Congress to pass another one of any size. He extended unemployment benefits. He tried to take action on mortgage foreclosures, and perhaps he could have done more along those lines. But the financial lobby fought him, Congress wouldn’t support cramdown legislation, and banks have resisted taking part in his program. The Consumer Financial Protection Agency would be a nice pro-worker feather in his cap, but it wouldn’t help anyone find a job and probably wouldn’t have gotten through Congress any quicker even if they weren’t busy with healthcare.

So exactly what would his “pivot” back to jobs1 have looked like? Nobody ever really says. But aside from giving rousing speeches, the big levers available to fix the economy are monetary, which is in the hands of the Fed; fiscal, which he’s done; and meliorative, which he’s largely done too. The rest is mostly window dressing.

1Assuming that this mythical “more modest” healthcare bill really could have passed any faster than the current one in the first place. Frankly, given the Republican Party’s dedication to “What part of NO! don’t you understand” as its political strategy, I doubt it.