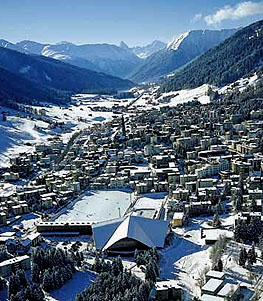 So what’s the mood in Davos this year? Who knows. But Felix Salmon is there, and his mood is distinctly sour:

I’m [] siding with the pessimists like Nouriel Roubini and Martin Wolf. They’re both convinced that the problems of southern Europe are both grave and intractable, although they differ in their prediction of what the consequences will be: Nouriel sees a good chance of the eurozone breaking up, while Martin sees the PIGS (Portugal, Italy, Greece, Spain) staying in the euro and ending up stuck in a long-term slump, able to neither cut interest rates nor devalue their currencies in an attempt to regain competitiveness. The only other option is an across-the-board cut in nominal wages, on the order of 30% or so. That’s something which is pretty much inconceivable, although Ireland seems to be trying to move in that direction.

….My feeling is that the US poses at least as much of a risk to the global economy as southern Europe does. There’s a good chance that 2010 could be the year of walking away from underwater mortgages; there’s no sign of the private sector releveraging; and the government has clearly reached its limit in terms of the degree it can step in and borrow on behalf of the rest of us. If the attempt to prop up the still-overvalued housing market fails and there’s another downwards lurch, there will be a whole new wave of bank insolvencies and much less fiscal space to bail them out than there was pre-crisis. And the fact that most delegates here at Davos seem blissfully unconcerned about the possibility of a second nasty lurch downwards doesn’t reassure me in the slightest.

For what it’s worth (and you can guess how much that is), I think I agree about Europe but I’m not quite so pessimistic about the U.S. The American economy seems unlikely to come roaring back to life this year, and a midyear dip seems at least plausible, but overall I suspect we’re just going to see a long, hard slog to recovery, not a second disaster.

The wild card, though, is whether a disaster somewhere else will ripple across the globe and eventually touch off a disaster here. That’s certainly possible, and it’s part of the risk I think Tim Geithner took when he chose to rescue the banking system the way he did. It’s left the entire system in fragile shape, which is OK if nothing terrible happens in the next couple of years and everyone has time to earn their way back to full strength. But if something terrible does happen, we’re still not in very good shape to handle it. So let’s hope for a lack of disasters, OK?