Yesterday I took Jon Stewart to task for claiming that instead of proposing a big, comprehensive healthcare reform plan, Obama and congressional Dems should have been content instead with just a few straightforward ideas that could have passed easily (“That’s it. Four simple things. Done.”). A bunch of you thought Stewart was right and I was missing the point. This comment from JS12 was typical:

Having watched Stewart in context earlier today, I have to disagree. The point he was trying to make was that Obama had not done enough to put his health care message out in a manner straightforward and 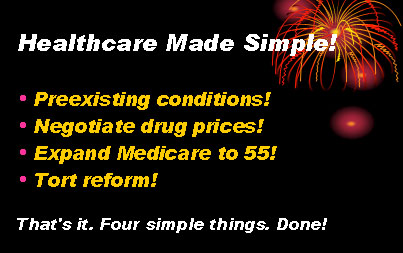 simple enough for the general public to comprehend exactly how it will help them. It was not my impression that Stewart was pondering why Obama did not simplify and dumb down health care reform itself, only its rhetorical presentation to the public.

Actually, my sense is just the opposite: Stewart was suggesting that healthcare reform could have been radically simplified. A popular meme making the rounds these days is that Obama overreached on healthcare reform and should instead have just proposed a few popular, small-bore fixes that could have gotten through Congress easily. Stewart seemed to be buying into that notion.

But that’s a nitpick. Let’s say JS12 is right: Stewart was talking solely about messaging, not policy. Unfortunately, that might be even worse. Too many liberals have become addicted to the cult that says messaging is everything, that progressive plans could be implemented if only we learned to talk about them better. And we should learn to talk about things better. But when we start mainlining this Kool-Aid wholesale, we just end up kidding ourselves. It gives us a sugar rush when we’re frustrated, but it’s not a real solution.

There’s no question that Obama could have sold healthcare reform better. But here’s the thing: if you actually want to solve real healthcare problems, the policy itself has to be complex. There’s just no way around that.

“But the explanation doesn’t have to be complex,” you say. No, it doesn’t. And in fact, if you take a look at the way Obama talks about healthcare reform, it’s mostly pretty straightforward and easy to understand. But guess what? The opposition gets to talk about it too. And if the underlying policy is complex — which it has to be — then they get to talk about that. And they do.

So they’re going to pick the bill apart. They’re going to complain that it’s thousands of pages long. They’re going to pull out the least popular bits — like mandates and cost controls — and flog them as hard as they can. They’re going to tell scare stories about death panels and Medicare cutbacks. They’re going to carp endlessly about the horsetrading that’s inevitable with any complicated piece of legislation. They’re going to stall and delay. They’re going to do everything they can to highlight the bill’s complexity, nurture doubts about individual provisions, and gin up outrage over the legislative process. The Drudge/Fox/Rush axis is going to beat this drum 24/7. And this is all legitimate because no matter how Democrats try to sell it, the underlying bill really is complicated. Like it or not, Republicans get to take advantage of that.

So what were the real problems with healthcare reform? The biggest underlying one is something that we talked about a lot last year but have largely since forgotten: the first, most fundamental choice Obama made was to leave employer health insurance largely untouched. “If you have insurance now and you like it, you can keep it.” That was almost certainly necessary, but it also insured that two-thirds of the country would see virtually no benefit from the bill. So we started from inside a big hole.

What else? Well, Democrats chose to be responsible. Unlike Republicans, Obama and congressional Democrats insisted that the bill be paid for. This hurt them badly because (a) nobody likes taxes, (b) there’s always a bit of smoke and mirrors involved in this kind of thing, and (c) they ended up getting no credit for this from the punditocracy. Obama also insisted on including serious attempts at cost control. That’s also unpopular. The better bet would have been to pass all the benefits and skip both the taxes and the cost controls. That would certainly have been simpler and more popular. But it would also have been wildly irresponsible. I don’t know about you, but it’s not why I voted for the guy.

Finally — and in my mind, this was the worst mistake — Democrats didn’t control the process. A bill like this is always going to get less popular the longer it’s in the public eye, but Dems dawdled forever, thinking they could negotiate with Republicans to get a bipartisan agreement. Obama encouraged this effort, and it was disastrous. It gave Republicans months and months of time to build up opposition and complain that they weren’t being taken seriously, and it predictably went nowhere. If Democrats had kept a tighter control of things, conference negotiations would have taken place in September at the latest and a final bill would have been passed in October.1 Dems screwed the pooch badly on this, and Obama did too. That’s what killed healthcare reform, not the lack of a killer PowerPoint presentation.

1And Obama could have made his pivot to jobs and financial reform and bank bashing months earlier. The delay on healthcare hurt a whole lot of liberal initiatives on a whole lot of different levels.