David Barstow talks to CJR’s Greg Marx about his big tea party story that ran in the New York Times on Monday. An excerpt: 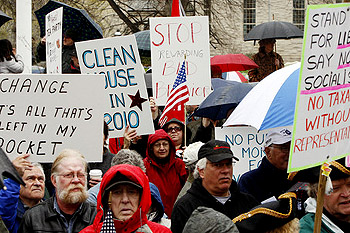 That was one theme that became really clear to me — their incredible anger at the economic pain that they were witnessing in their own lives and the lives of their friends and family, and their anger and disappointment at the government’s role in both the events that led to the recession and the response, especially the bailouts.

The other thing that came through was this idea of impending tyranny. You could not go to Tea Party rallies or spend time talking to people within the movement without hearing that fear expressed in myriad ways. I was struck by the number of people who had come to the point where they were literally in fear of whether or not the United States of America would continue to be a free country. I just started seeing that theme come up everywhere I went.

….If you spend enough time talking to people in the movement, eventually you hear enough of the same kinds of ideas, the same kinds of concerns, and you begin to recognize what the ideology is, what the paradigm is that they’re operating in….You begin to understand why it is that they’re so concerned about ACORN, why it is that they’re so concerned about global warming, why it is that they’re worried about the potential for things like FEMA camps. You understand why they’re so angry not just at Obama and the Democrats, but also at people like John McCain. You understand where they’re coming from on stimulus and bailouts and the Federal Reserve. If you scrape deep enough with people and spend enough time really listening to what they’re concerned about, it does tend to gel. There’s a fear that both parties have been complicit in this giant charade that has done enormous damage to ordinary Americans. It’s very complex, and yet at the same time there is something coherent about it.

Barstow’s piece is well worth your time if you haven’t already read it. Click here. I hope that someday he writes a companion piece focusing just on the ideology that he talks about in this interview. Some of it is well worn, and some of it is new, and it would be fascinating to tease these strands out. On the one hand, you have the perfectly sensible belief that “both parties have been complicit in this giant charade that has done enormous damage to ordinary Americans” — something that even most readers of this blog might largely agree with — and on the other hand you have exotic worries about FEMA concentration camps and Interpol agents arresting U.S. citizens on their own soil.

I’m still not sure where this is going, but my sense is that we’ve seen this movie before. The tea party movement is basically a modern day John Birch Society, and eventually they’ll either wither away or implode. These kinds of groups tend to get increasingly conspiratorial over time, and that limits both their growth potential and their influence. Republicans are pandering to them now, but I wonder how much longer they’ll keep it up?

In fact, given the way that politics has been speeded up in virtually every way over the past few decades, the tea party implosion might come faster than we think. Having Fox and Glenn Beck behind them has obviously helped the movement grow far faster than, say, the John Birch Society could grow in the 60s, but it also means that they might hit their peak a lot sooner too. Eventually even conservatives are going to tire of Beck’s gold buggery and wacky conspiracy theories, and they’ll likely tire of the tea party movement too. And it will all happen at fast forward speed.

That’s my guess, anyway. In the meantime, Barstow says you really need to read The Five Thousand Year Leap — the version with the Glenn Beck introduction, presumably — if you want to understand how tea partiers think and what motivates them. So get cracking.