Was Joseph Stack a terrorist? Andrew Sullivan says yes: “This was obviously an act of terrorism. When someone is mad at the government, and when he flies a plane into a federal building, killing two and traumatizing countless others and urges others to do the same, he is a terrorist.” Glenn Greenwald says yes: “The issue isn’t whether Stack’s grievances are real or his responses just; it is that the act unquestionably comports with the official definition.” Dave Neiwert says yes: “Since when, after all, is attempting to 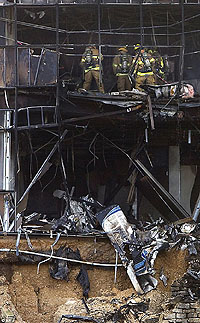 blow up a federal office as a protest against federal policies NOT an act of domestic terrorism?” Dave then helpfully supplies the FBI’s official definition:

Domestic terrorism refers to activities that involve (1) acts dangerous to human life that are a violation of the criminal laws of the United States or of any state; (2) appear to be intended to intimidate or coerce a civilian population; (3) to influence the policy of a government by mass destruction, assassination, or kidnapping; and (4) occur primarily within the territorial jurisdiction of the United States. [18 U.S.C. § 2331(5)]

Well, let’s take a look at this. I’ve added numbers to the FBI definition for easy reference, and obviously Stack met conditions #1 and #4. No argument there.

But how about #2? Was Stack trying to intimidate civilians? In his manifesto he says, “Nothing changes unless there is a body count….But I also know that by not adding my body to the count, I insure nothing will change.” Italics mine. This means (obviously) that he was willing to kill himself to make a point. Then there’s this: “I can only hope that the numbers quickly get too big to be white washed and ignored that the American zombies wake up and revolt.” Is he talking here about more killing of civilians? Or is he hoping that other people follow his lead and kill themselves, with the numbers eventually getting so big that the “American zombies” wake up? At best, it’s unclear. He’s certainly not trying to inspire civilian fear here (he wants them to wake up, not give in), but beyond that it’s hard to say.

But if #2 is ambiguous, #3 isn’t: Stack doesn’t really have a policy he wants changed. He’s mad at the government, he’s mad at paying unfair taxes, and he’s mad at the turns his life has taken. But if, instead of killing people, suppose he had been holding them hostage. What would his demands have been? Repeal of Section 1706 of the tax code? That’s about the closest he comes to saying something specific.

“Jews out of Palestine” is a policy grievance. Ditto for “abortion is murder,” “freedom for Tamil,” and “Jim Crow forever.” But all Stack has is a vague and inchoate rage caused by his feeling that he’s been screwed by the IRS and nobody is willing to help him. Calling that a policy grievance is to strip the word of all meaning.

Not everybody who goes postal is a terrorist. Stack didn’t have a political agenda in the usual sense of the word, he was just a guy who’d reached the end of his rope and finally snapped. That happens to thousands of people every year. Stack may have chosen to end his life a little more spectacularly than most, but that doesn’t raise him to the level of a terrorist.

POSTSCRIPT: Just for the record, I agree with all the commenters (and others) who say that if Stack had been a lone wolf Muslim who had some equally vague complaints about, say, being treated badly by U.S. customs officials, right-wingers would be quick to call it terrorism if the guy snapped and killed a few in revenge. But they’d be wrong, and the way to fight this attitude is not for lefties to insist that Stack is a terrorist too, it’s to insist that we use the word properly for everyone. You need to have some kind of at least semi-coherent political agenda to be a terrorist, and “the IRS sucks” is no more one than “the INS sucks.”