Last night I wondered what bloggers really thought about the off-the-record briefing they attended on Monday with several anonymous Treasury officials. Here’s a smattering of response. Megan McArdle: “Tim Geithner is growing into his role; this was a much more relaxed and confident team than I saw a year ago….[These sessions] are useful for figuring out how administration officials are thinking about a problem.” Matt Yglesias: “My two opportunities to speak with Tim Geithner have essentially driven home to me the extremely sharp limits of ‘speak to Tim Geithner’ as a strategy for figuring out what the Geithner Treasury Department is all about.” Tim Fernholz: “The two newsiest things we learned: They’re going to change HAMP….They Think Republicans Will Filibuster Regulatory Reform Efforts.”1Felix Salmon: “I 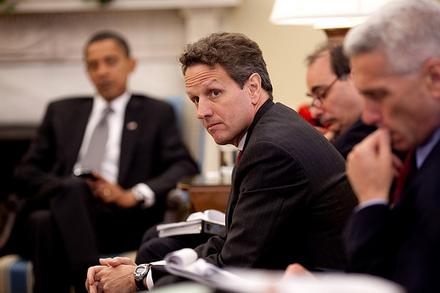 came away with the impression that life at Treasury is not much fun, on a day-to-day basis, and that the stresses of trying to set economic policy in the face of strong opposition from both the banking lobby and the Republican party are wearing on the officials there.”

Fair enough. But what about the utility of the ground rules: no names and no quotes. Bloggers were allowed to paraphrase what the officials said, but they couldn’t quote directly and they couldn’t name names. This is the kind of thing bloggers used to denounce routinely, but Matt Yglesias and Atrios take a crack at defending it. First Matt:

I do think anonymity has some value in that by preventing journalists from doing sensationalist stories based around a single direct quote it forces you to focus on the big picture of what the officials in question are trying to say. For example, if you looked through a transcript of yesterday’s conversation with bloggers with an unscrupulous eye, you could probably find a Tim Geithner quote about California or Greece or something that, sexed-up with a juicy headline, would constitute “news.” But since we’re not allowed to quote directly, only characterize in general terms what was said, and I can convey to you that Geithner talked a bit about both California and Greece and was sensible but didn’t have any earth-shattering insights into the situation.

And Atrios in a similar vein:

Generally I think group deep background experiences are more edifying than fully on the record ones, and much less prone to abuse by the political actors than anonymous “leaks” precisely because there are a bunch of people in the room. More problematic are the single source to single reporter leaks which are clearly orchestrated but in which anonymity either provides cover for no good reason or conveys — wrongly — that the anonymous source is doing something brave by speaking to reporters when in fact they’re just doing what they are told.

I’m not sure if I buy this or not. It has a pretty obvious whiff of special pleading to it, but again, it’s easy for me to take a self-righteous stand on this kind of thing since I’m not in Washington and never have a chance to go to these briefings. (Or, more germanely I suppose, to turn down invitations to them.) It’s true, as Atrios says, that a briefing like this one has less chance for mischief than one-on-one leaks, which allow officials to slag their enemies without ever being held responsible for it. Still, I can’t help but think that everyone involved underestimates the possibility of the same thing happening here. It’s an obvious opportunity for administration (or other) officials to curry favor with bloggers by implying that they secretly believe X without really being held accountable for it. After all, it’s a lot easier to walk back an anonymous paraphrase than it is a direct quote, as Felix Salmon demonstrates here.

In any case, I realize that all this kvetching just marks me as a rube, since background briefings are a way of life in Washington and everyone accepts that. Except, as Tim Fernholz points out, it’s not quite the longtime practice I made it out to be:

This isn’t an ancient Washington tradition; the SAO insistence is actually a legacy of recent partisanship. I’ve met veteran Washington reporters who used to walk in to Clinton administration Defense Secretary Bill Cohen’s office on a Saturday morning just to say hey and see what was going on. But in today’s political and media environment, the kinds of things that people do when having a regular conversation — tell jokes, air hypotheticals, misspeak, think aloud — are more likely to be printed by reporters and more likely to be used to attack the speaker. The incentives aren’t there for officials to share real insight with reporters outside of settings like this one.

Nickel summary: count me as still on the fence. I continue to think that routine anonymity like this is more corrosive than people give it credit for. On the other hand, “sources say” really is an ancient tradition, hardly an innovation of modern journalism, and sometimes it really is the only way to get news out. On the third hand, when bloggers start getting invested in this tradition, it gets harder to say just what the value of blogging is versus traditional journalism. More and more, though, that’s a distinction without a difference anyway, so maybe it doesn’t really matter. Stay tuned.

1I gotta say, though, the filibuster thing doesn’t seem like news. Was there ever any serious chance that Republicans wouldn’t filibuster regulatory reform?