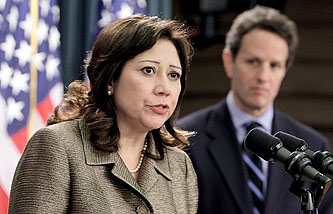 Nice piece by Esther Kaplan in The Nation about how Hilda Solis and her team are turning things around at the Department of Labor after nearly a decade of pro-business neglect:

Solis and her able deputies have inherited a Department of Labor in tatters. By the time they arrived in Washington, health and safety compliance had become all but voluntary, as had minimum wage and overtime pay. Within two months of taking office, Bush and his labor secretary, Elaine Chao, had rammed through Congress the repeal of a new ergonomics regulation that had been a decade in the making. “It was almost like PATCO [the Professional Air Traffic Controllers Organization] in terms of its symbolic importance,” says NYCOSH director Joel Shufro, referring to Ronald Reagan’s crushing of the union in 1981. “That sent employers a huge message.” After that, the DoL didn’t issue a single new regulation unless it was forced to by Congress or the courts.

….Facing badly depleted enforcement ranks, Solis hired 710 additional enforcement staff, including 130 at OSHA and 250 for the crucial wage-and-hour division, upping inspectors by more than a third. Another hundred will come on next year to staff a crackdown on the misclassification of millions of employees as “independent contractors” — a dodge to avoid paying taxes and benefits — a move that has set off enormous buzz on business blogs.

….[Labor Solicitor Patricia Smith is] known especially for her insight that, as Retail union organizer Jeff Eichler, who worked closely with Smith in New York, says, “to impact an entire sector had to involve working with groups outside the bureau.” She used labor unions, churches and immigrant groups as her eyes and ears on the ground; they organized plaintiffs, served as liaisons with state investigators and translated big enforcement fines into long-term gains for workers by means of union contracts or sector-wide employer manuals.

In fact, it was these efforts to use community groups as a force multiplier that triggered a furious campaign by business front groups to block her nomination. Senator Enzi obtained reams of e-mails to produce an alarmist forty-page report about one small pilot program Smith had launched, Wage Watch, which trained community members to report wage violations. Conservative groups such as the Heritage Foundation and Americans for Limited Government piled on, the latter issuing an alert that if her concept went national, “it could turn tens of thousands of ‘community organizers’ into raving vigilantes.” Nonetheless, at the new DoL, community partnerships are fast becoming standard operating procedure.

Actually, I sort of like the idea of roving bands of vigilantes turning in employers who mistreat their employees. Sounds like Solis and Smith are on the right track here.