Corn-based ethanol is supposedly a green alternative to gasoline. The corn farming lobby certainly thinks so, anyway, and they’ve persuaded Congress to mandate (and subsidize) increased corn ethanol production through the year 2015.

But is corn ethanol really greener than gasoline? If you analyze total lifecycle emissions directly (i.e., including the CO2 emissions involved not just in burning ethanol, but also in producing it), the answer is yes, though not by much. But there’s more to it than just production. When you switch forest or pasture land to cropland in order to grow more corn, that releases CO2 as well, and you have to take that into account whether the farm lobby likes it or not. (And they don’t.) The chart on the right shows the effects. So what’s the conclusion? A new paper in BioScience1 takes a fresh look at what the market response is to increased corn production, 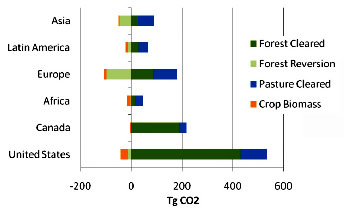 including (a) reduction in food consumption due to higher food prices, (b) intensification of agricultural production, (c) land use change into cropping in the US, and (d) land conversion in the rest of the world. The paper suggests that previous estimates of induced land use changes (ILUC) have been too high, but:

Using straight line amortization over 30 years of production at current fuel yields [] results in ILUC emissions of 27 g CO2 per MJ….[A]dding our lower estimate of emissions to the direct emissions from typical US maize ethanol production (about 65 g CO2e per MJ) would nearly eliminate carbon benefit of this biofuel relative to typical gasoline (94-96 g per MJ).

(Note: MJ = megajoule, a unit of energy.) In other words, even giving corn ethanol the maximum benefit of the doubt, it’s still no greener than gasoline: it releases about 92 grams of CO2 per megajoule of energy compared to 94-96 for gasoline. What’s more, if you assume a more reasonable 20-year amortization period, corn ethanol’s greenhouse gas emissions are even higher. And if you don’t assume that people eat less thanks to increased corn ethanol production, but instead just spend more on food, it goes up even more.

Bottom line: corn ethanol is no greener than gasoline. In fact, it’s almost certainly less green, and at the very least, there’s no urgent need for the U.S. government to pay billions of dollars to subsidize its production. Too bad Iowa is the first state on the primary calendar every four years, isn’t it?