One of the great tensions in the politics of healthcare reform is between what’s good for the Democratic Party and what’s good for individual members of Congress. On the former, I think you can make a pretty strong case that passing reform is a net benefit for the party as a whole: Dems are going to suffer 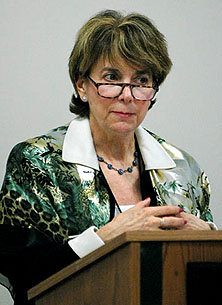 the downsides of supporting healthcare reform no matter what happens, but if it passes at least they have an accomplishment to their credit that they can try to sell. Without that, they just look completely hapless.

Now, I think this is a pretty strong argument, but it’s obviously a debatable one. In the case of individual members of Congress, however, there’s just no question about it: there are certain Democrats in conservative districts who are going to suffer if they vote for reform. Maybe even lose a seat they might otherwise have won. That’s what happened to Marjorie Margolies-Mezvinsky when she provided the 218th vote for Bill Clinton’s tax-raising budget in 2003. Karen Tumulty catches up with her today:

Margolies insists that she did the right thing. What was wrong was with politics itself, she says. The bill was at least 80% grounded in Republican-backed ideas, and had been endorsed by Fed Chairman Alan Greenspan. The fighting over that last 20% was “heartbreakingly partisan to me, and I’m very much a centrist,” she recalls. “It just infuriated me.”

She thinks it has only gotten worse since she left Congress. “What has happened is the minority has taken over,” Margolies insisted. “Democrats don’t frame as well as Republicans do. [And for Democrats,] this is the vote that is going to get a tremendous amount of play in their districts.”

Margolies thought that she could make her constituents understand why she had made the choice she did. But she underestimated the power of the sound bite. “I was really good at the four-minute explanation when I went back back to the district,” she says. “But it’s the Frank Luntz 30 seconds that kills you.” She notes ruefully that her name has become shorthand in Washington for committing political suicide. “I was a terrible politician. It was a drive-by,” she says. “I never thought I’d become a verb.”

Now, you can take two lessons from this. The first is that Margolies did indeed commit political suicide with her vote. The other is that 1994 was a Republican tidal wave and she would have lost her seat regardless. But make no mistake: Margolies is the example that haunts a lot of fence-sitting Democratic congressmen today. In the end, I think healthcare reform will probably pass, but it’s going to come down to a handful of individuals making very difficult, hardheaded decisions about their own personal futures. It won’t be easy.