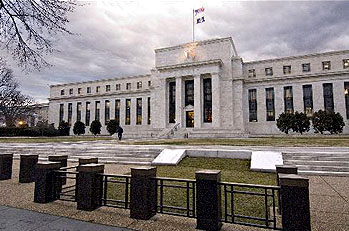 Steve Randy Waldman argues that obsessing over leverage and capital requirements is a lost cause:

Bank capital cannot be measured. Think about that until you really get it. “Large complex financial institutions” report leverage ratios and “tier one” capital and all kinds of aromatic stuff. But those numbers are meaningless. For any large complex financial institution levered at the House-proposed limit of 15×, a reasonable confidence interval surrounding its estimate of bank capital would be greater than 100% of the reported value. In English, we cannot distinguish “well capitalized” from insolvent banks, even in good times, and regardless of their formal statements.

….Regulation by formal capital has a proud and reasonably successful history, but has been rendered obsolete by the complexity of modern financial institutions. The assets and liabilities of a traditional commercial bank had straightforward, widely acceptable book values. For the corner bank, discretionary modeling mattered only in setting credit loss reserves, and the range of estimates that bank officers, external auditors, and regulators would produce for those reserves was usually pretty narrow (except when all three colluded to fake and forbear in a general crisis). But model complexity overwhelms and destroys regulatory capital as a useful measure for large complex financial institutions. We need either to resimplify banks to make them amenable to the traditional approach, or come up with other approaches more capable of reigning in the brave new world of banking.

I’m way out of my league arguing about this, but I have a good reason — about which more below. First, though, the argument.

Steve is, of course, right that “regulatory capital” is a surprisingly ephemeral concept. It’s hard to measure and it’s hard to know even what to measure. (Read his whole post to get the entire gruesome story.) Hell, it’s not even entirely clear what the real purpose of bank capital is. And yet, I’m not so sure that measuring capital adequacy is quite as doomed an enterprise as Steve thinks. For example: this hasn’t been making the rounds lately, but last year there was a little boomlet in discussion about the value of tangible common equity as a measure of bank solvency. Why? For exactly the reason Steve writes about. Regulatory capital, as it’s currenty defined, failed miserably during the credit crash of 2008. Basel II was a disaster, as was the U.S. near-equivalent that allowed banks to judge risk using their own internal models. And as Steve points out, Lehman Brothers was, technically, very well capitalized the day before it collapsed in a heap.

But TCE is a much simpler concept, and much easier to measure. It is, if you want to be simplistic about it, much closer to a measure of “actual money.” And over the decade between 1995-2005, TCE ratios dropped dramatically at large banks. I don’t know exactly what Lehman’s number was before it imploded, but I think it was somewhere in the vicinity of 2.0. That’s probably around half of what it was a decade earlier, and quite possibly a third to a quarter what it should have been given the greater risk and complexity of modern banks. If regulators had focused more on the steady drop in TCE during the boom years, the meltdown of 2008 might have been substantially ameliorated.

Now, that’s hardly the whole picture. Capital adequacy is a ratio, and even if regulators focus more heavily on TCE they still have a problem with forcing banks to properly value the asset side of their balance sheets. Steve goes into all the reasons that’s hair-raisingly difficult, but there are ways of making that simpler too. What’s more, there are other rules that, although they don’t directly address capital adequacy, have a big effect on it. Reining in off-balance-sheet vehicles is an obvious one, as are rules that put limits on shadow funding sources. More transparent derivative trading would help too. Put all this stuff together and it would go a low way toward making the entire banking system safer. Not perfect, but better.

So why am I wading into this argument in the first place? Because Steve’s take is that since trying to govern leverage is hopeless, the only way to make the financial system safer is to radically simplify banking and break up big banks. But that’s a counsel of despair. If you think capital adequacy is tough to regulate, what makes you think that we can radically simplify the entire structure of the modern banking system? And if banks will fight tooth and nail to oppose limits on leverage (and they will), what makes you think they’ll be any less tenacious about resisting efforts to break them into little pieces?

My take is that that’s hopeless. There are things we can do to make banking simpler, but there’s just no way that we’re going back to the 70s. Not. Gonna. Happen. And the chances that Congress — which is barely willing to approve even watered-down consumer protections — will break up banks the way Teddy Roosevelt broke up Standard Oil? Forget it.

It’s useless to declare a problem unsolvable and then suggest instead that we tackle a problem that’s even more unsolvable. I don’t have much hope that Congress and the Fed are going to crack down on leverage in a way that’s anywhere near as broad or as strict as I’d like them to, but there’s at least a chance of making progress on this front. If we throw up our hands and declare it impossible, we’re effectively giving up on financial reform entirely.