So then, what’s going on with China? Things have been testy for a while, but now suddenly we’re hearing reports that U.S.-China relations may be on the mend. No currency 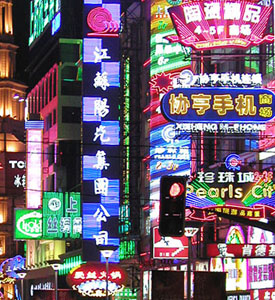 war, a bit of agreement on Iran sanctions, and sort of a mini-detente over Taiwan and Tibet. Hooray! But Dan Drezner points us to the FT’s Gideon Rachman, who says the long picture isn’t quite so hunky dory, especially this:

The mega-trend in the background is the rise of China and the relative decline of the US — and the expression of this will be the gradual challenge to American military hegemony in the Pacific. This will not be a comfortable process.

Maybe not. But it presupposes that China is going to keep growing at the blistering rate we’ve seen for the past couple of decades — a pace they have to keep up just to keep from falling behind. Gordon Chang, writing in World Affairs, thinks they’ve already missed their chance to do that:

The analysts and the conventional wisdom they peddle are wrong. China’s economic model, which allowed the Chinese to take maximum advantage of boom times, is particularly ill suited to current global conditions. About 38 percent of the country’s economy is attributable to exports — some say the figure is higher — but global demand at this moment is slumping.

….Chinese technocrats, goaded by a multitude of analysts and foreign leaders, have known for years that they would have to diversify the economy — steer it away from investment and exports and toward consumption. Yet [Prime Minister Wen Jiabao], in office since 2003, has not made much of an effort to do so….So the Chinese economy, once in an upward super-cycle, is now headed on a downward trajectory. Beijing’s leaders had the opportunity to fix these problems in a benign period of growth, but they did not because they were unable or unwilling to challenge a rigid political system that inhibits adaptation to changing circumstances. Their failure to implement sensible policies highlights an inherent weakness in the system of Chinese governance, not just a single economic misstep at a particular moment in history.

Now, Chang is a longtime doomsayer about the Chinese economy. His book, The Coming Collapse of China, predicted that China would collapse in 2006. So like any good doomsayer proven wrong, he’s just pushed out his prediction a bit.

In other words, take him with a big shaker of salt. Still, I think there’s a germ of truth here that gets missed too often: Chang is right that China’s economy is probably shakier than we usually give it credit for. Not only is it built on a foundation of booming exports, but its political system requires fantastic growth rates just to remain stable. As China’s economy grows, however, its wage base will grow too and this will hurt their ability to keep up the flood of exports. Without internal demand to make up for it, growth rates will fall below the magic number of 8% per year. For them, that would be about as painful as a sluggish growth rate of 1-2% would be for us.

Now, maybe China will make the transition better than Chang thinks. And in any case, they’ll certainly continue to grow both their economy and their influence even if they don’t do it quite as manically as they have since the 80s. In other words, I’ll leave the doomsaying to Chang. Still, I suspect that China is going to run into a few more hiccups on the way to domination of the Pacific than the alarmists think. Their brand of autocratic government is going to have a very hard time coping with a restive middle class once per capita income starts to bump up against $10,000 or so. That’s still a ways off, but it’s not that far off.