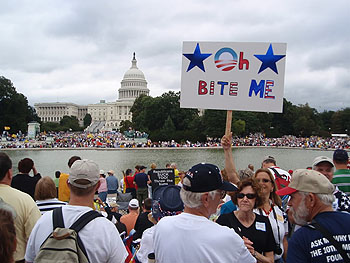 In Politico today, Jonathan Martin and Ben Smith write that the mainstream media, after being caught off guard by the rise of the tea parties, now seems determined to make up for that by manically overcovering them:

Part of the reason is the timeless truth in media that nothing succeeds like excess. But part of the reason is a convergence of incentives for journalists and activists on left and right alike to exaggerate both the influence and exotic traits of the tea-party movement. In fact, there is a word for what poll after poll depicts as a group of largely white, middle-class, middle-aged voters who are aggrieved: Republicans.

But just read the succession of New York Times stories, profiling newly energized activists who are “bracing for tyranny.” Or follow the dispatches of the CNN crews who went along with two national Tea Party Express bus tours. Or delve into the crosstabs of polls conducted in the past few weeks by the Times, CNN, and POLITICO about the opinions and demographic characteristics of tea partiers. Or check out the blogger the Washington Post hired to chronicle their movement….Indifference has given way to curiosity, and — in recent weeks especially — to a nearly manic obsession that sometimes seems to place the tea partiers somewhere near the suffragettes and the America-Firsters in the historical ranking of mass political movements.

….The tea parties’ main expression has been public gatherings. But last week’s Tax Day crowds were not representative of a force that is purportedly shaping the country’s politics. About a thousand people showed up in state capitals like Des Moines, Montgomery and Baton Rouge — and even fewer in large cities like Philadelphia, Boston and Milwaukee. In some cases, turnout was less than the original protests spurred by the stimulus, bailouts, financial crisis and new Democratic president last April 15th.

….What’s more, the eruption of protest after a president of a new party takes the country in a new direction is a standard feature of modern American politics. Ronald Reagan’s election produced record-breaking rallies for the now-forgotten Nuclear Freeze movement. The right, with rhetoric and occasional excesses that are almost identical to those of today, rose up angrily against Bill Clinton in the mid-1990s.

Look: this is right. It just is. The tea parties ought to be covered, and liberals should fight back against them. But treating them as some kind of massive new movement misses the point. These people have been around forever, and they’re always upset when liberals take over. In fact, if there’s anything new about the tea partiers it’s that the movement is smaller, less organized, and less influential than either the Birchers of the 60s or the anti-Clinton wingnuts of the 90s. That is, the power of populist conservatism has actually declined over time. The real driver behind all the press attention was pointed out by the friend who emailed the Politico piece to me:

The subtext here, though, is the power of conservative media over other MSM outlets. Unaddressed is how the Tea Party elements came to prominence in such a way that other media outlets were compelled to play catch up. The answer of course is Fox.

Politico itself, of course, has been second only to Fox in its obsession with the tea parties, something that Martin and Smith briefly allude to but then drop. As my friend cynically notes, “Perhaps their page views are slowing down on those stories, enabling them to try a ‘let’s move on’ approach. More likely, this is just another Tea Party story to continue the page view diet they seem addicted to.”

Well, maybe. I guess I’m a little more charitable. I don’t want the media to stop covering the tea partiers, but they really need to dial it down a notch and give it only the attention it deserves. Which is to say: not that much, really. Remove Fox and FreedomWorks from the equation and there probably wouldn’t be much left of the whole movement. So whether they’re doing it for pageviews or not, bravo to Politico for pointing this out.