Matt Yglesias wants to know why so many progressives are obsessed by the insane profitability of the financial sector: 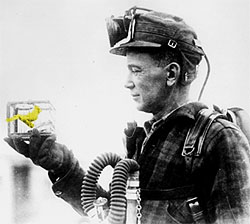 Street less profitable addresses? At the end of the day, insofar as people want to entrust their money to greedy risk-taking bankers, I would rather have those bankers be located in New York and paying taxes to the IRS that finance great schools and shiny new mass transit systems than have the bankers be located in Zurich and financing their schools and transit systems.

Speaking only for myself, I’d say this misconstrues the issue. Finance sector profitability isn’t a problem per se, it’s the symptom of a problem. Put another way, you might say that industry profits are a useful metric for assessing how bad the financialization of the U.S. economy has become. Historically, the financialization of a country’s economy is a huge blinking red light, and we’d do well to avoid it.

More prosaically, industry profits are also a good way of measuring whether our regulations are working. A safe, efficient banking system just shouldn’t be enormously profitable. So if our regulations are working, you’ll see profits decline. Conversely, if they stay high, there’s something wrong. Finance sector profitability may not be the only (or even the best) way to measure if Wall Street is working well, but it makes a pretty decent canary in the coal mine.

Remember: at its core, finance is supposed to be a way of allocating capital to the real economy. The way it does this might be simple or it might be complex, but its fundamental purpose is to provide a service to the business community. When, as Martin Wolf put it yesterday, it instead becomes a “machine to transfer income and wealth from outsiders to insiders,” the real economy suffers as capital is increasingly misallocated. That’s the problem we need to address, and the best way to address it is to make pure finance less profitable. It’s better to refocus Wall Street into caring primarily about the moderately profitable business of providing efficient funding to the rest of the world than it is to let them do whatever they want and then try to tax the excess away.

(FWIW, I’ve never been sold on the idea of taxation as the best policy response to income inequality anyway. But that’s a subject for another post.)

UPDATE: There’s also a political economy problem with outsized finance industry profits, which Ezra Klein gets at here. Taxation can mitigate this, though even here I don’t think it’s an ideal solution.

Another thing to keep in mind: taxing the industry doesn’t really motivate Wall Street to engage in less risky, more socially useful activities. To do that, you have to tax riskier activities differently from less risky activities. To say the least, that’s pretty tricky.