I had dinner with some friends the other night, and one of the guys who showed up was Rand Simberg, an aerospace engineer who writes frequently about NASA and space flight in general. As it happens, Rand and I disagree about the value of a manned space program, and since he’s a conservative, we disagree about nearly everything else as well. But it turns out there’s at 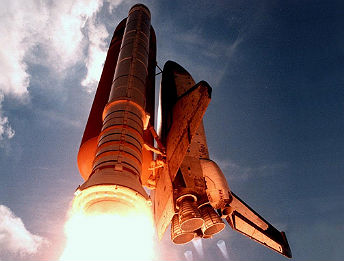 least one thing we agree about: Barack Obama’s plan for space exploration is both pretty conservative and pretty good.

At least, I thought we agreed. But then I read Charles Homans’ piece about the space program in the latest issue of the Washington Monthly. Here’s how he describes it:

Under the budget released by the Obama administration in February, NASA was to get out of the business of human spaceflight altogether, at least for the near future — no more space shuttle or rockets, no capsules or moon-landing apparatus. In their place, NASA would oversee something very different: a $6 billion, five-year contract for a handful of private companies to ferry American astronauts to and from the International Space Station — to operate a fleet of space taxis, more or less. Human spaceflight, the province of national identity and aspiration since Yuri Gagarin first hurtled into orbit, was going to be outsourced.

….The idea in a nutshell is this: if NASA helps commercial companies get their rockets onto the launch pad, and those companies find a market for their services beyond NASA, the agency’s human spaceflight program will finally be free of its expensive obligations to maintain its rudimentary orbit-oriented activities….With the money it saves, NASA can redouble its research and development efforts to acquire the technology it needs to push the boundaries of exploration once again.

I find the current debate over President Obama’s new space policy mind-bendingly ironic. We have a radical president bent on socializing and nationalizing everything from the auto industry to hospitals, but when he comes up with a policy that actually harnesses free enterprise, we hear from conservatives nothing but complaints.

….If we can finally get on with the business of letting private industry take on the (literally) mundane task of getting people only 200 miles above and let NASA focus on new technologies, there is plenty of time over the next few years to decide exactly where to go from there….The important thing is that we had to euthanize NASA’s expensive, unneeded new rockets and move on to the more critical development of opening up space. We’re now on a path to do so, assuming that Obama’s plan survives Congress.

Sounds good! Unfortunately, the Homans piece goes on to take a pretty gimlet-eyed view of whether the private-enterprise version of hauling people and cargo into earth orbit is actually likely to succeed. The genius of private enterprise, of course, is that it might, and it might do so in ways that nobody can predict. That’s why I support it: I’m not thrilled at the idea of spending massive amounts of taxpayer money on manned space flight, but I am willing to spend moderate amounts of taxpayer money on seed money to help the private sector do it.

But will it work? Homans, frankly, doesn’t provide much hope that it will: the market, he says, is just too small, consisting mostly of space station ferrying and unmanned satellite launches. And not only is that market small, but it’s not growing either. Space tourism is another possibility, but launching people into orbit is no $200,000 lark that any Wall Street tycoon can afford. The Russians charge $20 million a pop for this, and that price would have to come way down before there was much of a demand for this kind of excursion.

There’s more — including a grim description of what happened when the Pentagon tried to outsource its satellite launch capability under Bill Clinton — and none of it is very hopeful sounding. I think I may be about to retreat back to my original position: NASA should fund unmanned exploration but get out of manned space flight entirely. Let’s hope private industry proves me wrong.