Bruce Bartlett argues that congressional districts are too big and that we should pare them down by increasing the number of congressmen:

Conservative columnist George Will has argued that increasing the size of the House would obviate the need for campaign finance restrictions. It is the huge size of congressional districts that requires mass communications, 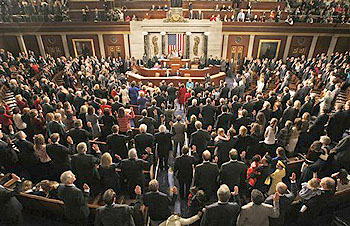 such as costly television advertising, which drives the need for vast sums of money requiring congressmen to spend so much time fundraising.

….Some will say that greatly increasing the size of the House will make it into a zoo, as if it isn’t already with so many thousands of staff people, constituents and lobbyists wandering around. When one looks at other countries, it’s interesting to see that most have lower houses of their legislatures that are larger than our House of Representatives even though their populations are much smaller than ours.

….It’s not realistic to even think about going back to congressional districts with 30,000 people — that would require a House of Representatives with more than 10,000 members. But neither is it feasible to continue raising the size of each congressional district infinitely. At some point, an adjustment needs to be made. I think the reapportionment that will follow this year’s Census is as good a time as any to do it.

This is a pretty common suggestion, but here’s my problem with it. Right now, each member of Congress represents about 700,000 people. That’s obviously too many to allow old-fashioned shoe leather campaigning. But what would it take to get back to that? I live in a city of 200,000, and even at that running for mayor or city council is only barely a shoe leather operation. If you want members of Congress who truly represent their neighbors because they actually know them, instead of members who just know how to raise money and schmooze with local power brokers, you’d probably want districts no bigger than 150,000 or so. That would require a Congress of about 2,000 members.

Would that be a good idea? Maybe! But I think that’s about what it would take. Once you get above 200,000 people in a district, I think you’ve hit a tipping point: it doesn’t really matter how much bigger they get. Once mass media is the only way to keep in touch with constituents, the only question left is which kind of mass media to use. And who really cares about that?

So: would a Congress with 2,000 members be worth it? On the bright side, it would be harder for lobbyists to influence. On the down side, it would make party discipline even more of a joke than it already is. And we’d have to build a new Capitol building to house this seething mass of pols. Color me unconvinced.