Let’s try again: what happened to the stock market yesterday? We still don’t know, but it appears that something concrete happened against the background of a market that was already tripwire nervous over Greece and the euro and China and whatnot. 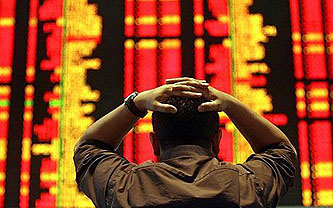 Over at Kid Dynamite’s site, a guy with experience writing computerized trading algorithms offers this suggestion:

Considering that the giant decline happened on pretty much *no* volume, I think other factors are at work. I believe the core problem here was a real order imbalance with lots of volume (which took us down the original 350), then nyse halts these stocks, the market orders get rereouted (regnms and all) to ECN’s where there is much less liquidity, and what liquidity is normally there is mostly provided by the nefarious HF strats who were rightly scaling back risk. So the 10K shares that might have been a downtick on nyse blows throught the BATS book completely.

In English, this means that when trading started to get too hot and heavy, the New York Stock Exchange stepped in to slow things down. In the old days, this would have worked, but not anymore. Most trading of NYSE stocks doesn’t actually happen on the NYSE anymore, it happens on electronic communication networks (ECNs) like BATS in Kansas City, which is the third-largest stock exchange in the world. So what the algo guy is saying is that when the NYSE tried to slow things down, the computers responsible for program trading just switched their orders over to ECNs. Unfortunately, ECNs are largely used by high-frequency trading shops, and the HFT guys closed up when the market went kablooey. So the ECNs had no buyers, and even a small sell order could blow the doors off a stock price. Which it did.

Quite aside from the merits of the HFT controversy itself, this is symptomatic of an overall problem that we’ve all become pretty familiar with lately: the people in charge of financial markets don’t really know what they’re doing anymore. In the derivatives industry, they created securities so complex that no one understood them and no one understood just how interconnected and dangerous they’d become. In the trading industry, a combination of ECN-based dark pools, HFT algorithms, and God knows what else have created a trading environment that no one truly understands and no one can control. Obviously markets can boom and crash just fine without these innovations, but they can sure boom and crash a lot bigger and a lot faster with them. Felix Salmon comments:

There’s a very sensible idea going around that a simple way to deal with nearly all of these problems, at a single stroke, would be to implement a tiny tax on financial transactions. Historically, people have complained that such a tax harms liquidity, which is true. But the fact is that it harms the bad kind of liquidity — the liquidity which dries up to zero just when you need it most. Liquidity, if it’s spread across multiple electronic exchanges and can disappear in a microsecond, does very little actual good, and in fact does harm during tail events like this. Let’s tax it, and raise some money for the public fisc at the same time as slowing down markets and making them think before doing a trade.

I’m very much in favor of this. Maybe someday we’ll understand all this stuff well enough to control it, but right now we don’t seem to. Our financial system really needs a little bit of sand in the gears to bring it back down to human speeds. This would be a good way to do it, and would probably have other benefits too (quite aside from the money it raises). Count me as a fan.