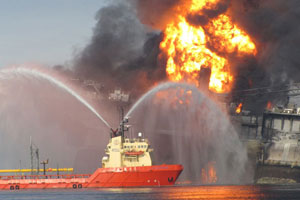 I think it’s actually right to say that the BP oil spill is something like Obama’s Katrina, but not in the sense in which most critics seem to mean it.

It’s like Katrina in that many people’s attitudes regarding the response to it reveal completely unreasonable expectations of government. The fact is, accidents (not to mention storms) happen. We can work to prepare for them, we can have various preventive rules and measures in place. We can build the capacity for response and recovery in advance. But these things happen, and sometimes they happen on a scale that is just too great to be easily addressed. It is totally unreasonable to expect the government to be able to easily address them — and the kind of government that would be capable of that is not the kind of government that we should want.

This conflates two very different things. Katrina was an example of the type of disaster that the federal government is specifically tasked with handling. And for most of the 90s, it was very good at handling them. But when George Bush became president and Joe Allbaugh became director of FEMA, everything changed. Allbaugh neither knew nor cared about disaster preparedness. For ideological reasons, FEMA was downsized and much of its work outsourced. When Allbaugh left after less than two years on the job, he was replaced by the hapless Michael Brown and the agency was downgraded and broken up yet again. By the time Katrina hit, the upper levels of FEMA were populated largely with political appointees with no disaster preparedness experience and the agency was simply not up to the job of dealing with a huge storm anymore.

In the case of Katrina, you have the kind of disaster that, contra Levin, can be addressed by the federal government. In the case of the BP spill, we’re faced with a technological challenge that can’t be. They could hardly be more different.

But there is one way in which they’re similar. As Levin says, Katrina would have been an immense disaster no matter what. But it was far worse than it had to be because a conservative administration, one that fundamentally disdained the mechanics of government for ideological reasons, decided that FEMA wasn’t very important. Likewise, the BP blowout was made more likely because that same administration decided that government regulation of private industry wasn’t very important and turned the relevant agency into a joke. If you believe that government is the problem, not the solution, and if you actually run the country that way for eight years, it becomes a self-fulfilling prophecy. But we shouldn’t pretend it’s inevitable.

1Just to be clear: I’m talking here only about capping the leak itself. As T.R. Donoghue points out, the feds do have an overall plan for responding to and cleaning up spills.

UPDATE: I was only talking about the post-Katrina response by FEMA in this post, but John McQuaid usefully points out that none of the major damage would have happened in the first place if the federal government had done a decent job building the hurricane levee system in New Orleans. If you believe that this is just another example of why you shouldn’t trust the government to do anything right, then that’s a point in Levin’s favor. If you believe that it’s another example of why we should make sure government works better, then it’s a point in mine.