Paul Krugman has been waging a one-man war recently against the forces of darkness that think the United States needs to cut back spending because its debt level is too high. (See, for example, here, here, here, here, here and here. And that’s just the blog.) Generally speaking, I’d say he’s got by far the better of the 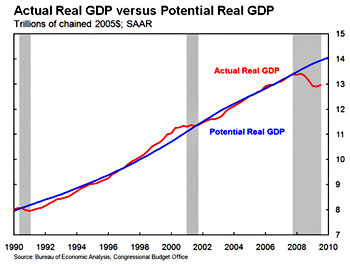 argument: right now, inflation is low (as are inflationary expectations), interest rates are low, unemployment is high, the output gap is high, and consumers simply don’t seem to have the wherewithal to drive a strong recovery in the short-term. A healthy dose of fiscal stimulus would almost certainly do the economy a lot of good, and almost equally certainly, would have a very modest effect on future debt levels.

A lot of conservatives disagree, but recently Raghu Rajan went even further: not only doesn’t he support further fiscal stimulus, he doesn’t even support keeping interest rates low. This seems crazy, and his supporting arguments don’t seem very impressive either. However, he does make one point that seems worth considering:

A growing number of studies that suggest that banks (and other financial institutions) tend to take more risk, both on the asset side and through leverage, when interest rates are kept low for a long time. Clearly, banks search for yield when rates are low. I have papers with Doug Diamond that suggest that if rates are expected to be low for a sustained period (and the Fed intervenes to provide liquidity whenever the market tightens), banks also take on a lot of liquidity risk by borrowing short term and investing in illiquid assets.

Yes, none of this risk taking and illiquidity seeking seems excessive just now, especially because the European crisis has put a dampener on exuberant markets, and because banks are still nursing their past wounds. But we must remember that there was talk that covenant lite loans were back in vogue before the European problem hit us. Once the anxiety about Europe dies down, covenant lite loans, and worse, will be back. Also, we must remember that risk taking did not seem excessive in the run up to the crisis, until we learnt the banks had gone overboard.

It’s true: low interest rates have the usual macroeconomic effect that we all know about, but they also have a direct effect on the psychology of the financial industry that might not be especially positive if they’re maintained over a long period. It’s hardly enough to change my mind on the basic issue at hand, but it’s worth a thought or two.

As for the larger question, my only beef with Krugman and his supporters is this: their basic argument is that we need to spend more now but rein in spending in the long term. I agree. The problem I have is that while they give short-term stimulus plenty of ink/pixels, only rarely and in passing do they mention the need for long-term fiscal restraint. I understand why (or at least I think I do): it’s just not something that deserves a lot of mental bandwidth when your main fight is over immediate stimulus and you’re fighting with people who not only don’t want any, but who are actively arguing for cutting spending. Still, I think this is a mistake. The short-term stimulus message would go down a lot easier if all of us demonstrated in a little more detail and a little more depth that we really, truly accept that there are some difficult decisions to be made down the road and we’re willing to talk about how to make them. That means Social Security, Medicare, defense spending, and taxes. Conservatives might not be willing to get serious about all this stuff, but we liberals should be.