Have you heard of the Jones Act? Unless you read Newsmax and listen to a lot of right-wing radio, probably not. It’s an obscure statute that’s been on the books since 1920, and it requires all shipping between U.S. ports or in U.S. coastal waters to be carried in U.S.-flag ships that are owned and crewed by U.S. citizens.

So why are conservatives suddenly up in arms about it? Because, they claim, it’s a labor-inspired rule that’s obstructing aid to a Gulf Coast being ravaged by the BP oil spill. Why, if only President Obama would stand up to the union bosses and grant a waiver to the rule, we could get help from the Dutch, the Norwegians, the Belgians, and all the other countries that desperately want to help but are being kept away. Sarah Palin got the ball rolling on this meme a couple of weeks ago when she said, “It’s amazing to 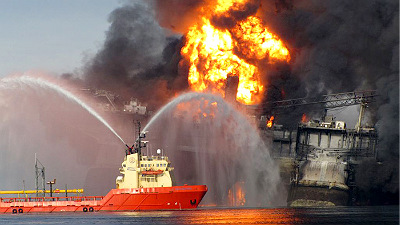 me and to so many others that though President Bush had been able to waive Jones Act provisions for Katrina, President Obama hasn’t thought to do that yet?” It’s been a right-wing talking point ever since.

This is, as it happens, entirely false. No waivers have been requested yet because so far none have been needed. The Jones Act doesn’t apply to vessels like oil skimmers that would be used in coastal areas, and the world’s largest skimmer, a converted Taiwanese supertanker, is in the Gulf and will begin operations soon. It doesn’t apply at all more than three miles off the coast, where the spill itself is taking place. There are, it turns out, over a dozen foreign flagged ships helping out with spill operations. “To date,” reports FactCheck.org, “25 countries and four international organizations have offered support in the form of skimming vessels, containment and fire boom, technical assistance and response solutions, among others.” Only one offer has been declined.

Not surprised? Me neither. But I was pleasantly suprised by this headline on a Jones Act story distributed on Wednesday by McClatchy:

One of the reasons that conservatives get away with mendacious memes like this one is because the media rarely calls them out directly on it. When it came up on Meet the Press last weekend, for example, David Gregory’s response was “Mm-hmm,” and it was left to Rep Ed Markey (D–Mass.) to explain why the charge was baseless. So three cheers to the heroic but anonymous copy editor at McClatchy who read William Douglas’s story and didn’t try to fudge things. It’s a false talking point, full stop, and it’s nice to see someone in a mainstream organization say so plainly.