Controlling healthcare costs is hardly a new concern. In the 90s the hot topic was HMOs. In 80s it was capitation and vertical integration. And in the 70s it was GPOs, or group purchasing organizations. In the current issue of the Washington Monthly, Mariah Blake explains:

The underlying idea was simple: because suppliers generally give price breaks to customers who buy large quantities, hospitals could get better deals on, say, gauze or gloves, if a group of them came together and bargained for ten cases, rather than each hospital buying a case on its own.

A good idea! But then things changed: hospital collectives started spinning off GPOs as standalone for-profit subsidiaries that other hospitals could join by paying dues. By the end of the 70s, virtually every hospital in America 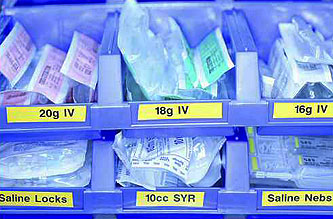 belonged to a GPO — which might still have been a positive development if it weren’t for one further thing:

In 1986 Congress passed a bill exempting GPOs from the anti-kickback provisions embedded in Medicare law. This meant that instead of collecting membership dues, GPOs could collect “fees” — in other industries they might be called kickbacks or bribes — from suppliers in the form of a share of sales revenue. (For example, in exchange for signing a contract with a given gauze maker, a GPO might get a percentage of whatever the company made selling gauze to members.) The idea was to help struggling hospitals by shifting the burden of funding GPOs’ operations to vendors. To prevent abuse, “fees” of more than 3 percent of sales were supposed to be reported to member hospitals and (upon request) the secretary of health and human services.

But, as with many well-intended laws, the shift had some ground-shaking unintended consequences. Most importantly, it turned the incentives for GPOs upside down. Instead of being tied to the dues paid by members, GPOs’ revenues were now tied to the profits of the suppliers they were supposed to be pressing for lower prices. This created an incentive to cater to the sellers rather than to the buyers….This situation only grew thornier in 1996, when the Justice Department and the Federal Trade Commission overhauled antitrust rules and granted the organizations protection from antitrust actions, except under “extraordinary circumstances.” Once again, the idea was to help struggling hospitals, this time by allowing the buying groups to grow big enough to negotiate the best deals for their members. But the decision led to a frenzy of consolidation. Within a few years, five GPOs controlled purchasing for 90 percent of the nation’s hospitals, which only amplified the clout of big suppliers.

The net result, Mariah reports, is that today GPOs sign exclusive sweetheart deals with huge suppliers, and these deals prevent smaller, more innovative companies from breaking into the healthcare market. The exemption from the anti-kickback law was passed with the best of intentions — but then, that’s what the road to hell is paved with, isn’t it?

Via email, Mariah adds: “Interestingly, despite all the focus on health care costs in the run up to health care reform, GPOs never entered the conversation.” But they probably should. The whole piece is worth a read.