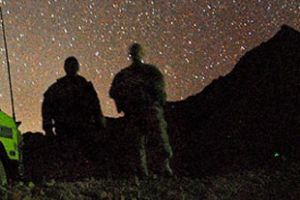 Matt Steinglass is surprisingly optimistic that we’re about to enter a new, more reticent age of American power projection:

There haven’t been many examples lately of people learning from their mistakes, but the invasion of Iraq appears to be a mistake from which some lessons have been learned. It’s difficult to imagine America returning to fantasies of easy conquest and democracy-building anytime in the next few decades, anywhere in the world. Summing up the mood, Joe Klein calls the invasion a “national disaster”, and calls for new criteria for the use of American military force that are actually rather old criteria: “We should never go to war unless we have been attacked or are under direct, immediate threat of attack. Never. And never again.”

I would very much like to believe this. But I really don’t. We left Vietnam in 1975 and were supposedly so scarred that we’d never do anything like that again in any of our lifetimes. Your definition of “like that” might be different from mine, but a mere five years later we dipped our toe into Afghanistan and then, over the next 30 years, intervened militarily in Grenada, Nicaragua, Panama, Iraq, Somalia, Haiti, Kosovo, Afghanistan 2.0, and Iraq 2.0. In other words, once every three or four years, which is about as frequently as we did this kind of thing before Vietnam. Some scarring, eh?

Right now it looks like we’ve learned a lesson because, aside from a bit of chest beating from frustrated neocons over Iran, no one’s banging the war drums. But no one was banging the war drums in 1976, either, which is why it looked like maybe we were going to enter a new era back then too. Then the Soviets invaded Afghanistan and suddenly everything changed. So let’s not declare a victory for common sense in foreign policy just yet. I’ll believe things have changed when something actually happens

overseas, a president tries to build support for intervention, and Congress and the public—including Joe Klein and me—balk. That will mean things have changed.

In the meantime, my friend Marc Danziger, whose son is in Afghanistan, is full of contempt for the way the Pentagon wages war (“It’s like we turned the military over to the DMV”) and believes that our big problem there is that “We have no strategic objective.” Well, one man’s strategic objective is another man’s blather, but the fact is that President Obama has clearly articulated what he wants to accomplish:

I set a goal that was narrowly defined as disrupting, dismantling, and defeating al Qaeda and its extremist allies, and pledged to better coordinate our military and civilian efforts….We must deny al Qaeda a safe haven. We must reverse the Taliban’s momentum and deny it the ability to overthrow the government. And we must strengthen the capacity of Afghanistan’s security forces and government so that they can take lead responsibility for Afghanistan’s future.

Now, maybe you don’t like this objective. Maybe you think it needs to fit into a grander global plan of some kind. I don’t, especially, but it’s a perfectly legitimate view. Still, even if we had a different global plan than we do now, I don’t think it would change what we want to accomplish in Afghanistan and it wouldn’t change the difficulty of accomplishing it. This kind of counterinsurgency campaign is just really hard, and hardly anyone ever succeeds at it. Our current rules of engagement, which are frustrating for everyone, nonetheless seem to be about as effective as they can be. A year from now, if they’re still not working, even with a huge increase in troops and an obviously highly competent officer like David Petraeus in charge, it’s hard to believe that anything else would work either. The Pentagon’s idea of how to wage war might or might not be as good as it could be, but failing to do the impossible is hardly evidence of it. It’s primarily evidence that we’ve taken on an intractable task.

And we’ll probably do it again. Just give us a few years to regroup and a plausible sounding enemy somewhere overseas. I’m pretty sure we’ll hop right back on that horse.