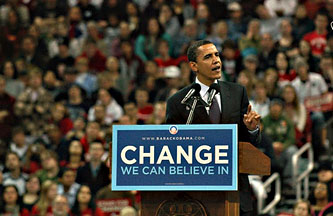 Earlier this morning, after Robert Gibbs took to The Hill to diss the “professional left” for being too whiny, I suggested that this kind of thing was inevitable. Since only 20% of the country self-IDs as liberal, Democrats have to pander to centrists and this is one way they do it. It’s not pretty, but it’s hardly surprising. I then went on to further annoy some fellow libs by tweeting, “Lefties used to talk about how WH could attack them in order to make its liberalism look more centrist. Doesn’t seem so appealing now.”

Now, this is all wildly inside baseball kind of stuff, and I’m about as far outside the ballpark as you can get and still talk about this stuff at all. So I wasn’t going to defend my points any further — especially since I think Gibbs was pretty gratuitously insulting. But then I got to emailing with Matt Yglesias about this, and I figure our exchange might advance the arguments a bit. Or not. You decide:

MY: I think you’re right about this in general, but not in particular. You don’t do an interview with The Hill to communicate with a mass public of squeamish centrists. Talking smack about your base in an inside baseball publication just seems like a straight fuck-up to me.

KD: I agree. Gibbs is a smart enough guy not to do this, though, and I wonder what he intended? Must have been something. I don’t think he just suddenly lost his temper in the middle of a sleepy interview with The Hill.

Just to be argumentative, though, maybe The Hill is a fine place to do this because Gibbs knows everyone will go berserk and it will get wider play? It’s certainly safer than doing it on CNN, where it would be completely uncontainable if it went badly awry.

MY: I think they’re genuinely pissed. There’s a real dialogue of the deaf happening inside DC between issue advocates and the Obama administration. I sympathize with a lot of the White House’s analytical view of the situation, but they really need to consider the emotional state of organizations that pulled out all the stops to get Obama elected and are now facing the reality that he’s not going to deliver cap and trade or labor law reform or immigration reform. You need to be able to tell people “if you go do this and that, then the following policy results you want will happen.” Right now they’re not offering any credible path forward.

KD: You’re more plugged into this stuff than I am, but I think I only half agree. Even activists are well aware that political realities interfere in ways that a president can’t always control. So I don’t think they demand results on every single issue (though certainly some do). My sense, though, is that Obama doesn’t even give them the rhetoric they want, even in private. If they felt like he was really on their side, but stymied by the Senate, maybe they’d cut him more slack. For some reason, though, he doesn’t seem willing to do this.

MY: I think we’re basically agreeing. I think people do generally understand the idea of objective political constraints. But activists want political leaders to articulate some kind of theory of how to get from Point A to Point B. I don’t think the White House is offering that.

So yeah: everyone agrees there are political constraints, but Obama seems unwilling — even in private — to do a little easy pandering to liberal interest groups. I don’t get it. As Joan McCarter twittered to me, “They need base in a midterm. Pro lefties are also door-knockers, phoners, donors.” This is obviously something that Team Obama is keenly aware of, and their unwillingness to do much to fire up the base is indeed puzzling.