The Wall Street Journal reports that even with unemployment at 9.5%, employers are having trouble finding workers:

In Bloomington, Ill., machine shop Mechanical Devices can’t find the workers it needs to handle a sharp jump in business. Job fairs run by airline Emirates attract fewer applicants in the U.S. than in other countries. Truck-stop operator Pilot Flying J says job postings don’t elicit many more applicants than they did when the unemployment rate was below 5%.

Sounds puzzling. Unless you read the rest of the story. The truck stop job, it turns out, pays minimum wage. The airline job requires you to move to Dubai. And the machine shop company pays only $13/hour but requires people with very specific skills. When they set up a ten-week training course of their own, they got plenty of applicants and 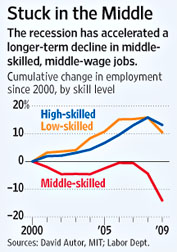 16 out of 24 graduated. But apparently we’ve gotten to the point where blue collar employers are barely willing to invest even ten weeks in training new workers for high-skill entry level positions.

There seems to be a common disconnect in stories like this. On the one hand, as the Journal notes, there really is some evidence that employers are having difficulty finding workers:

Since the economy bottomed out in mid-2009, the number of job openings has risen more than twice as fast as actual hires, a gap that didn’t appear until much later in the last recovery….If the job market were working normally — that is, if openings were getting filled as they usually do — the U.S. should have about five million more gainfully employed people than it does, estimates David Altig, research director at the Federal Reserve Bank of Atlanta. That would correspond to an unemployment rate of 6.8%, instead of 9.5%.

….Researchers at the Federal Reserve have estimated that [unemployment] benefits could account for between 0.4 and 1.7 percentage points of the unemployment rate. That doesn’t cover the 2.7-percentage-point gap between the current jobless rate and what Mr. Altig’s analysis of job openings suggests the rate should be.

But on the other hand, the examples they come up with are pretty lame. So what’s up? Even if there’s a shortage of high-skill workers, that’s a long-term problem, not something caused by the recession. In fact, as the chart accompanying the story shows, the number of high-skill job openings has declined since 2008. At the very least, then, companies should be having an easier time — slightly easier, anyway — filling their open positions unless either (a) they’ve lowered their wages or (b) high-skill workers are literally retiring en masse. Whatever it is, something doesn’t quite add up here.