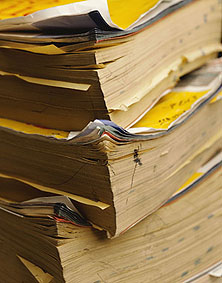 David Lazarus complains about one of his favorite bugaboos today, and since it’s one of mine too I’ll quote him:

This month, Time Warner Cable more than doubled its fee for an unlisted number to a whopping $1.99 a month, or nearly $24 a year….That’s a recurring fee — now one of the highest of its type in the telecom industry — for something Time Warner isn’t doing for customers.

….Time Warner’s fee is all the more remarkable because the company doesn’t produce its own phone book. It pays Sprint to compile all its customers’ names and numbers, and to then pass them along to whichever phone company dominates a particular market for inclusion in that firm’s directory. Just to be clear: That’s $1.99 a month not to be in a phone book that Time Warner doesn’t even publish.

AT&T’s and Verizon’s fees are a little more understandable. After all, they make extra cash selling ads in their phone books. The more people who choose not to be listed, the less valuable the directory becomes to advertisers, so the phone company wants to discourage people from leaving.

But Time Warner isn’t in the phone book business. Its recurring fee for unlisted numbers is a money grab, pure and simple.

This is one of my pet peeves not because I have to pay this fee — my phone number isn’t unlisted — but because it’s symptomatic of the looking glass way that we treat privacy in this country. Lazarus points out that the cost of unlisting a phone number is basically zero since it’s just a matter of flipping a flag in a database, and that the only reason Time Warner gets away with charging so much is because that’s what the market will bear. People who want unlisted phone numbers are willing to pay $24 per year in protection money to get one.

For fly-by-night operators, this is annoying but fine. They have the right to collect information and publish it, whether it annoys me or not. But phone companies are regulated monopolies. If I want phone service, I have no choice but to contract with a tiny number of suppliers who then have privileged information about me. Should I also pay them protection money for withholding my Social Security number or my date of birth from their phone books? After all, their access to that data is all due to their privileged position too.

As a society, we value privacy. We shouldn’t allow regulated utilities to decide who gets it and who doesn’t. Let the phone companies make money by selling services, not protection.

(Also worth noting: as cell phones and Skype and Google Phone become more popular, the only people who will have to pay for unlisting their phone numbers are increasingly likely to be the old and poor. Do we really want to endorse what’s basically a $24/year tax on the most vulnerable segments of the population?)