Via Megan McArdle, Derek Lowe blogs today about an entire field of pharmaceutical research revolving around PPAR ligands that pretty much went nowhere and cost drug companies a bundle:

Allow me to rant for a bit, because I saw yet another argument the other day that the big drug companies don’t do any research, no, it’s all done at universities with public funds, at which point Big Pharma just swoops in and makes off with the swag. You know the stuff. Well, I would absolutely love to have the people who hold that view explain the PPAR story to me. I really would. The drug industry poured a huge amount of time and money into both basic and applied research in that area, and they did it for years. No one has to take my word for it — ask any of the academic leaders in the field if GSK or Merck, to name just two companies, managed to make any contributions.

….Honestly, I don’t understand where these they-don’t-do-any-research folks get off. Look at the patent filings. Look at the open literature. Where on earth do you think all those molecules come from, all those research 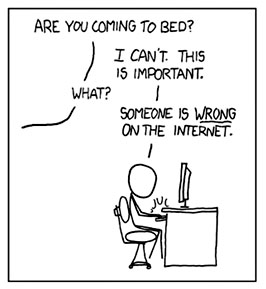 programs to fill up all those servers? There are whole scientific journals that wouldn’t exist if it weren’t for a steady stream of failed research projects. Where’s it all coming from?

I don’t doubt that Derek saw this argument somewhere, and to be honest, I don’t even begrudge him the rant. We’re all sensitive to dumb arguments in our own areas of expertise, especially if we’re really tired of hearing them.

But I’m genuinely curious: is there anyone of any stature who’s made this argument? I’ve never seen it. There are plenty of arguments about the relative size of the contributions of academic and commercial pharmaceutical research, and plenty of arguments about whether, for example, the current patent regime is the best way of incentivizing commercial research. But the basic story seems to be pretty broadly accepted: universities and the government do a lot of basic research and corporations then take that research and do the work necessary to produce actual commercial drugs that attack actual illnesses. It doesn’t always work that way (private companies do some basic research too), but I’ve never seen a serious argument that commercial pharma companies do nothing at all.

Anyway, just curious. I’m not really picking on Derek here, I guess I’ve just spent too much time lately being annoyed by the amount of time we all spend responding to the dumbest, most extreme forms of arguments, and then this one happened to pop up. But who knows? Maybe I’m wrong and JAMA and the New England Journal of Medicine are chock full of editorials telling us that commercial researchers don’t actually do anything. If so, I’ll stand corrected.

POSTSCRIPT: Of course, in the political world lots of influential people really do make dumb, extreme arguments on a regular basis. And since they’re influential, they have to be responded to. But I still wonder if maybe we respond to them too much. Or maybe in the wrong way. Or something.