How much further do housing prices have to fall? David Leonhardt frames the debate this way:

Do you believe that housing is a luxury good and that societies spend more on it as they get richer? Or do you think it’s more like food, clothing and other staples that account for an ever smaller share of consumer spending over time?

If you believe housing resembles a luxury good, then you’ll end up thinking house prices will rise nearly as fast as incomes in the long run and that houses today aren’t terribly overvalued. If housing is a staple, though, prices will rise more slowly — with general inflation, as food tends to.

….Perhaps most persuasive is a statistic that [Robert] Shiller sent me when I asked him about this debate. It shows that the share of consumer spending — and, by extension, of income — devoted to housing has not fallen over time….As societies get richer, they do spend more and more on housing.

Some of this spending, Mr. Shiller notes, comes in the form of bigger, more expensive houses. These houses don’t do anything to lift the value of a smaller, older house — which is what matters to individual homeowners. But McMansions are not the only factor.

I think I’m mostly on Leonhardt’s side — though with a caveat. My view when the housing bubble started to burst was that prices wouldn’t revert to their historical mean. They’d drop to a point about 10-20% higher. I figured this was due to a few factors: incomes may have risen slowly over the past few decades, but they have risen, and that means people can afford more house. At the same time, higher incomes also mean that people can afford to spend a bigger piece of their income on housing. In the past, conventional wisdom said not to spend more than 25% of your income on housing, but that’s since gone up to 30% or even 35%. And finally, there really are some built-up areas (mostly on the coasts) where there’s simply a shortage of land to build more houses, and that’s going to push up average prices. Bottom line: housing prices still have a way to fall, but probably only about 15-20% more, not the 25-30% it would take to get back to historical levels.

But then there’s the caveat: it’s possible that this is right in the long term but not in the short term. In the short term, it’s possible that the housing bubble will overcorrect, partly for purely psychological reasons and partly because the economy is in such poor shape. So I’m not sure what I think anymore. If you held a gun to my head, I’d say that nationwide prices will end up settling at around 110-120 on the Case-Shiller scale, not 100. But you’d probably have to keep that gun to my head to make me put my money where my mouth is. 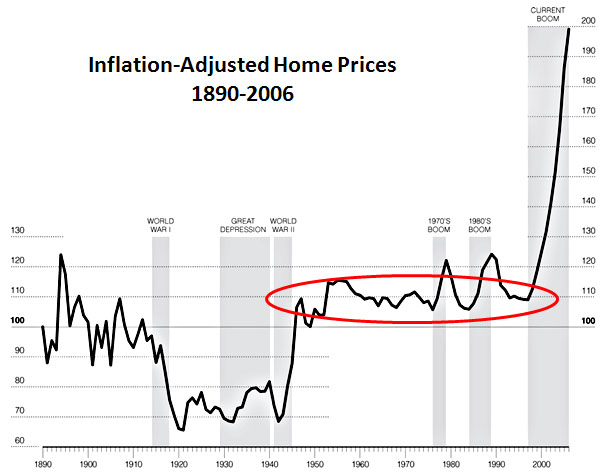