Here’s another take on the structural vs. cyclic unemployment issue that I should have mentioned earlier. But better late than never! Here’s the nickel summary: a recent IMF report suggested that about 1%-1.75% of our current unemployment is structural. So right off the bat, it means that most of our unemployment problem right now is cyclic: people just aren’t buying enough stuff. It’s a solvable problem.

But it turns out the structural problem is even smaller than that. Most people, when they talk about structural unemployment, are thinking of skill mismatches. So, for example, the construction industry is in a slump and lots of plumbers and bricklayers are out of work. Meanwhile, the healthcare industry is booming, but they need nurses and caretakers and they can’t find any. 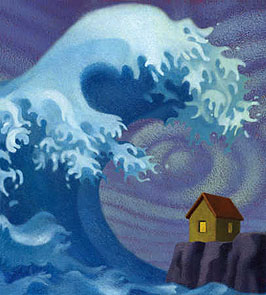 Or, more generally, our economy needs lots of educated workers and we just aren’t graduating enough people from college to meet the demand.

Foreclosures are closely linked with what Ezra Klein calls the anti-stimulus, and what Bruce Bartlett summarizes as: “When the history of the current crisis is written, much of the blame will be placed on the sharp fiscal contraction of state and local governments…I think economists will view this as a preventable error equivalent to the Fed’s passive shrinkage of the money supply in the early 1930s.”

….We can, with one page, adjust the bankruptcy rules to allow lien-stripping of mortgages. There’s all kinds of clever plans coming out every month — here’s yet another voxeu plan — for how to monetize and share the potential upsides as well as arguing over who would carry this out and how, but it all comes back to a lien-stripping (“cramdown”) mechanism.

And the banks hate this. It didn’t even get 50 votes, much less the 60 you would need, in the Senate. This battle is what caused Dick Durbin to say “the banks own the place” about the relationship between financial sector and the Senate. Second-liens could be written-down overnight, but that would cause bondholders and owners of financial assets to take a hit. So that’s not going to happen either.

The evidence is overwhelming on multiple fronts. Only a tiny part — 0.5% — of our unemployment is caused by skill mismatches. The rest is caused by foreclosures and lack of consumer demand. We could reduce the foreclosure problem a variety of ways, but all of them would hurt banks and so we haven’t pursued any of them. Instead we have only the hapless HAMP program. Likewise, we could stimulate consumer demand, but we didn’t do that either. The federal stimulus program combined with state budget cuts provided a net government stimulus of about zero.

There’s a lot we could do to reduce unemployment. We’ve simply chosen not to do it. Congress and the president have chosen not to seriously address either foreclosures or fiscal stimulus, and the Fed has chosen not to seriously pursue monetary loosening. It’s as if a heavy rain were flooding your house and you just decided not to bother putting out sandbags or turning on the pump in your basement. Instead you gave your kids a bucket and told them to bail. And then, when your house was three feet underwater, you shrugged and said you’d done everything you could. But hey — at least Wall Street is happy. That’s something.